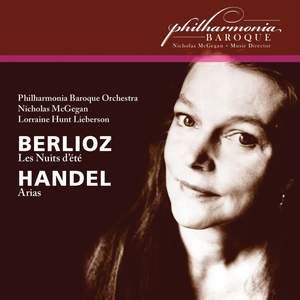 her warm and maternal tone combine with her interpretative commitment and spontaneity to produce wonderful results...Hunt Lieberson's inimitable approach makes a wonderful thing, for instance,... — BBC Music Magazine, September 2011, 4 out of 5 stars More…

Arianna in Creta, HWV 32, Act I: Mirami altero in volto

In conjunction with the Orchestra’s 30th Anniversary Season, Music Director Nicholas McGegan and Philharmonia Baroque Orchestra announce the launch of the ensemble’s own recording label, Philharmonia Baroque Productions. The label’s début release showcases the late Lorraine Hunt Lieberson in a live 1995 recording of Berlioz’s Les Nuits d’été and a live 1991 recording of arias from Handel’s Giulio Cesare, Ottone, Arianna, Radamisto and Agrippina. Hunt Lieberson had a long and fruitful relationship with McGegan and Philharmonia Baroque. The Berlioz is the last of seven acclaimed recordings she made with the orchestra and the first time she ever sang the full Berlioz song cycle in performance. Lorraine was in her element and the result was splendid. These incredibly moving performances are now available to a wide audience for the first time.

In more than two decades as its music director, Nicholas McGegan has established the San Francisco-based Philharmonia Baroque Orchestra and Philharmonia Chorale as the leading period-performance ensemble in America – and at the forefront of the 'historical' movement worldwide, thanks to notable appearances at such venues as Carnegie Hall, London Proms, Amsterdam’s Concertgebouw, and the International Handel Festival in Göttingen, Germany, where McGegan has been artistic director since 1991. Born in England, he was educated at Oxford, Cambridge and the Royal College of Music. In 2010, he was awarded an OBE for “services to music overseas". Other awards include an official 'Nicholas McGegan Day' declared by the Mayor of San Francisco to mark his 20th anniversary with Philharmonia Baroque.The next release from Philharmonia Baroque will be of Haydn's Symphonies.

her warm and maternal tone combine with her interpretative commitment and spontaneity to produce wonderful results...Hunt Lieberson's inimitable approach makes a wonderful thing, for instance, out of 'Vieni, o figlio' from Ottone, which is about as close to vocal heaven as it gets

[Her Theodora] is the most youthful and vulnerable-sounding on disc...Her voice glints and darts in the exultant bravura arias [from Ariodante], the coloratura always perfectly even...While never stinting on the impassioned climaxes, Hunt Lieberson shows an uncanny feel for the [Berlioz] cycle's mysterious half-lights...In sum a cherishable memento of a great artist who always sang, as a colleague once said, 'as if every performance were her last'.

'Le spectre de la rose' is interpreted with subdued inwardness before the voice is opened to reflect the rose's pleasure at being worn by the girl at 'Et j'arrive du paradis'...An eloquent account of Radamisto's lament 'Ombra cara' benefits from vocal steadiness and controlled emission of soft, unexaggerated tone.

The Handel arias...are glorious, exquisitely polished performances, every role inhabited comprehensively...But it is Berlioz's song cycle that is the real revelation...the astonishing velvety evenness of her singing in a number such as Sur les Lagunes, symbiotically entwined with the string textures around her, is worth the price of the disc alone.

Heartbreakingly beautiful. Berlioz’s Sur les lagunes shows her voice at its most lustrous: a tragic tour de force. But the arias show her range best: consoling in Vieni, o figlio from Ottone; proud in La giustizia from Giulio Cesare; poised and noble in Ogni vento from Agrippina.