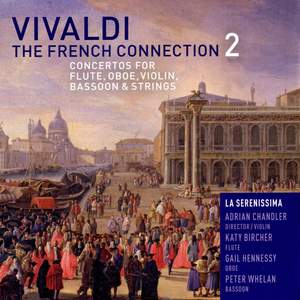 Chandler has put together a fascinating programme among which are some rarities including two 'world premiere recordings'...Katy Bircher and Chandler himself are the respective soloists [in RV431a]... — BBC Music Magazine, September 2011, 5 out of 5 stars More…

Vivaldi: Concerto for Flute, Strings & Continuo in A, RV 440

Vivaldi: Concerto for violin, strings & continuo in B flat, RV365

Adrian Chandler and La Serenissima, winners of 2010’s Gramophone Award in the Baroque Instrumental category for Vivaldi: The French Connection (AV2178), present the sequel, The French Connection 2, which features the world-premiere recording of Il Gran mogul, the lost Vivaldi Flute Concerto recently rediscovered in the National Archives of Scotland.

Unearthing of the score – which has been authenticated by the world’s leading Vivaldi scholars – made international, mainstream news and this first recording, by today’s leading exponents of the music of Vivaldi, is eagerly anticipated. The album contains nine concertos in all, including another premiere of a recently discovered Violin Concerto.

The French Connection enjoyed success on both sides of the pond, with a Top 3 Billboard Classical Chart position and nationwide airplay in the US as well as the UK.

Chandler has put together a fascinating programme among which are some rarities including two 'world premiere recordings'...Katy Bircher and Chandler himself are the respective soloists [in RV431a] and their warm-sounding, eloquently stylish playing is a constant delight.

Chandler's tight control gives freedom not constriction. The ensemble is spotless even on the whipping string flourishes of Paris Concerto No. 2 Every detail has meaning.

Chandler counts further success with a second volume of concertos whose gallicisms range from patrons to genuine style-imprints, to the provenance of the original manuscript paper...La Serenissima remain buoyant and sweet, eschewing the taut, opaque sound of many of today's Baroque orchestras, and embracing something more relaxed and open, helped by a pleasing bloom.

Another intriguing, excellently packaged and delivered volume in Chandler’s Vivaldi series. He is as much scholar as performer, and his notes offer useful background about the musical exchanges between France and Italy...The playing is beautifully articulated, with first-class work from the soloists.