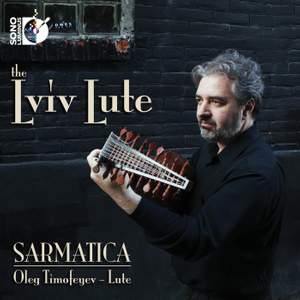 Raw passion and ancient energy electrifies the first release from Sarmatica on Sono Luminus. Led by world renowned guitarist Oleg Timofeyev, Sarmatica truly embodies the excitement of the music and the rich culture that developed it.

A medium-size anthology of vocal and instrumental music of the time, the Lviv Lute Tablature offers a great range of genre and national variety in its content. Next to the lute intabulations (i.e., ornamented arrangements of vocal music for solo lute) of the most popular works of Orlando di Lasso, Clément Janequin and Pierre Sandrin one finds in it anonymous songs and dances, professional compositions more modest in scope. Aside from the compositions of Italian, French, German, and Polish origin that found their way into this collection, there are also the three virtuosic fantasias by the celebrated English lutenist John Dowland.

Oleg Timofeyev is an American musicologist and musician of Russian origin, specializing in lute and Russian guitar. He is best known for his pioneering work in the discovery, promotion, interpretation, and authentic performance of the repertoire for the 19th- and 20th-century Russian seven-string guitar. He has worked for the revival of Russian music played with authentic technique on the seven-string guitar, often in collaboration with other artists, including the Russian Roma guitarist Sasha Kolpakov, the Kolpakov Trio, and recently with the American guitarist John Schneidermann as the duo The Czar’s Guitars, releasing the CD Souveneirs of Russia on the Sono Luminus label.

SARMATICA was created in 2009, when the Russian-American lutenist and musicologist Oleg Timofeyev arrived in Kyiv to teach as a Fulbright scholar. Soon he was invited to perform at the Seventh Early Music Festival in Lviv, where he met Danylo Pertsov and several other perspective members. A graduate of Kyiv Conservatory, Danylo Pertsov is an adventurous composer, a multi-instrumentalist early music specialist, and an expert on Ukrainian vocal traditions. It is due to Danylo’s free spirit, imagination, and compositional skills that this program offers so much variety in sound and concept. Mikhail Kachalov plays fiddle in a variety of styles, from Middle Ages and Renaissance to Scandinavian and Yugoslavian folk traditions. A graphic designer by training, Lubov Plavaska studied with Mekhdi Jusefian, the famous Persian composer, leader of ensemble “Jaam,” and performer on tar, setar, and tombak. In addition to her competence in the music of Iran, Kurds and Crimean Tatars, Lubov has studied the traditional Ukrainian singing and the Orthodox liturgy. Taras Kompanichenko is a celebrated epic singer of Ukraine and the leader of his own ensemble, Chorea Kozacky. Sergey Okhrimchuk is one of the most sought after violinists in Ukraine, equally creative in early Baroque and contemporary idioms.

With last year’s release of Souvenirs of Russia (DSL92112) from The Czar’s Guitars, as well as numerous other releases from the Dorian catalog, Mr. Timofeyev is currently working on a multi-disc box set which will cover the full history of the Russian guitar (to be released in 2012).