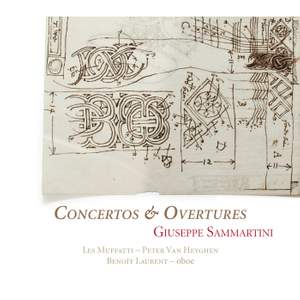 Sammartini, G: Concerto grosso for Strings and basso continuo in A Major, Op. 2 / 1

Sammartini, G: Concerto grosso for Strings and basso continuo in A Minor, Op. 5 / 4

During his own lifetime, Sammartini was considered to be one of the most talented composers of his generation. John Hawkins wrote in 1776: “His singularities can only be ascribed to that boldness and self-possession which are ever the concomitants of genius.”

He ranked Sammartini’s concertos and overtures at the same level as those of Arcangelo Corelli and Francesco Geminiani – and even held them in higher esteem than Georg Frideric Handel’s. Yet, through an inexplicable twist of history, Sammartini has remained an unknown quantity for the general public.

Les Muffatti have made a careful selection from among the plethora of Sammartini’s masterworks in order to fully reflect their quality. They hope that this world-première recording of works in Sammartini’s widely varying styles can do justice to this genius, and share the ensemble’s enthusiasm for this unjustly underrated composer.