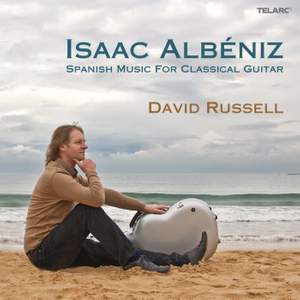 As always, Russell's playing is a masterly blend of musical intelligence and poetic inspiration...Russell references the piano in his sharply incised accompanimental figures and fulsome melodic... — Gramophone Magazine, September 2011 More…

To follow his critically-acclaimed album Sonidos Latinos, award-winning guitarist David Russell explores the music of Isaac Albéniz. Albéniz’s influence on the future of Spanish music was very profound, and transcriptions of his music have become an important part of the repertoire of the classical guitar.

David Russell is recognised worldwide for his mastery of the Spanish guitar repertoire. His new CD features distinctive works by the composer Isaac Albéniz, including movements from the critically-acclaimed “Doce Piezas Caracteristicas” and the picturesque “Cantos de España” to enchanting Gypsy-inspired dances like the “Zambra Granadina”. Suite Española No. 1 of 1886 is among the earliest of Albéniz's characteristic compositions. Albéniz composed the seven musical postcards of his Recuerdos de Viaje ("Souvenirs of a Journey") in Madrid in 1886-1887 in the styles of traditional Spanish dances. Rumores de la Caleta ("Murmurs of La Caleta"), which refers to the popular beach in the historic centre of the ancient city of Cádiz, is modeled on the malagueña, a gently swaying dance that originated in Málaga.

Winner of the 2005 Grammy® Award for Best Instrumental Soloist, Scottish-born guitarist David Russell is internationally renowned for his superb musicianship and inspired artistry. Russell has appeared regularly at prestigious halls in main cities, such as New York, London, Tokyo, Los Angeles, Madrid, Toronto or Rome. Since 1995, he has recorded exclusively for Telarc International, with whom he has recorded 16 CDs, among them the Grammy® award winning Aire Latino. Named a Fellow of The Royal Academy of Music in London in 1997 (where he is now also Visiting Professor), Russell has also won the Medal of Honour from the Conservatory of the Balearics, along with numerous international competitions, including the Andrés Segovia Competition, the José Ramírez Competition and Spain's prestigious Francisco Tárrega Competition. He has had a street named after him in Es Migjorn, the town in Minorca where he grew up, and after winning the Grammy®

Award, he received the Silver Medal of Nigrán, the town in Northern Spain where he lives. Both of David Russell’s last two Telarc albums, Sonidos Latinos and For David were awarded Editor’s Choices in Gramophone.

As always, Russell's playing is a masterly blend of musical intelligence and poetic inspiration...Russell references the piano in his sharply incised accompanimental figures and fulsome melodic lines - yet colours and textures akin to those found in Moorish architecture are the result.

Although Russell's playing acknowledges the folk and flamenco inspiration behind these pieces, most noticeably in his lightly dancing rhythmic pulse, he doesn't try to interpret them as such; instead he remains firmly on the classical side and the melodic layers are more apparent...Russell's new recording possesses the same charm, timbral beauty and depth of musical understanding which has been consistent throughout his outstanding performing career.