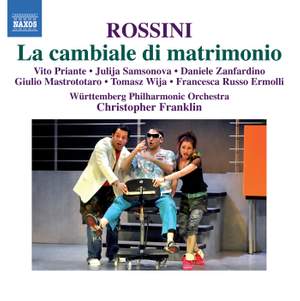 It is sprucely, at times wittily conducted by Christopher Franklin, and there is a good cast that includes a decent tenor as the romantic lead and a pair of lively buffo basses — Gramophone Magazine, September 2011 More…

La cambiale di matrimonio (The Bill of Marriage), composed when Rossini was just 18 years old, was given its first performance alongside Non precipitare i giudizi ossia La vera gratitudine (Don’t rush to judgement or True gratitude) an opera by Giuseppe Farinelli. The libretto was the work of Gaetano Rossi, who was later to provide the libretti for Rossini’s masterpieces Tancredi and Semiramide.

The plot revolves around the farcical attempts of Tobia Mill, a rich English merchant, to combine business with pleasure by forcing his daughter, the lovely Fanny (‘merchandise’) to marry Slook, his rich colonial correspondent from America, by means of a bill of exchange. Eventually, it is the gallant Slook himself who persuades Mill to allow Fanny to marry her true love, Edoardo Milfort.

Recorded during performances at the Kurhaus, Bad Wildbad, Germany July 2006, at the XVIIIth ROSSINI IN WILDBAD Festival.

It is sprucely, at times wittily conducted by Christopher Franklin, and there is a good cast that includes a decent tenor as the romantic lead and a pair of lively buffo basses

The Lithuanian soprano Julija Samsonova ripples through both cavatina and cabaletta with a well-produced voice which is fuller than a soubrette's. Daniele Zanfardino, with no aria, is a tenore leggiero who sings neatly...[Priante and Mastrototaro] do a good job, lively in their patter duet 'Dite presto' and singing without resort to breathiness or vocal mugging...Franklin conducts with a sportive touch.