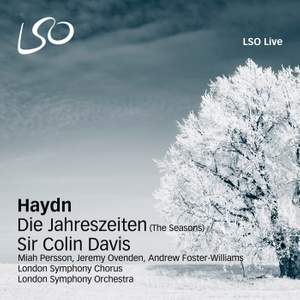 Sir Colin Davis's live account is founded on purposive modern-instrument playing and the conductor's own irrepressible dynamism; in this early eighties, he continues to show a sharp-eared appreciation... — BBC Music Magazine, August 2011, 4 out of 5 stars More…

Der Winter: No. 29a, Einleitung

In 2009 LSO Live released an acclaimed recording of Haydn’s Creation conducted by Sir Colin Davis. For his next release Sir Colin returns to the music of Haydn with a superb cast of young singers for his later oratorio The Seasons.

Following the success of Die Schöpfung (The Creation), which had swiftly gained popularity throughout Europe, Haydn’s librettist Baron Gottfried van Swieten suggested another project, based on James Thomson’s pastoral epic, The Seasons. One of Haydn’s last major works, Die Jahreszeiten depicts the yearly cycle of life in the countryside through the eyes of three peasants, providing us with music of thrilling vitality and creativity.

“The sun had been shining all Sunday, but the LSO and Chorus had their own fount of light and life on hand; Colin Davis, injecting even more joy into Haydn’s last oratorio. It was happiness that above all characterised Davis’s ruddy-cheeked, rhythmically precise performance. In this monument to the Enlightenment, enlightenment began with the choice of soloists. Miah Persson, Jeremy Ovenden and Andrew Foster-Williams each had their own timbre, but stayed united in expressive clarity. The crowning glory was the London Symphony Chorus. With secure pitch, continuous glee and warmth they pounced upon everything that Haydn bequeathed” The Times

Sir Colin Davis's live account is founded on purposive modern-instrument playing and the conductor's own irrepressible dynamism; in this early eighties, he continues to show a sharp-eared appreciation of the characteristic detail of Haydn's writing...the performance displays clarity and precision: the sound articulates the complex texutres neatly, allowing Haydn's remarkable scoring and and highly effective vocal writing to register to delightful effect.

From cheeky surface details to the underlying sense of optimism, Colin Davis is alive to every nuance of Haydn's late masterpiece. The conductor's lightness of touch allows the music to flow like quicksilver, albeit without undermining the work's long-range architecture...The soloists are also on beguiling form.

he is as responsive as ever to both the zest and humour of this most joyous of oratorios...Fugues always unfold with cumulative power...[The LSO chorus] sing with spirit, crisp diction and plenty of punch at climaxes - impressive agility, too......All three soloists are well-chosen...this exhilarating and affectionate LSO performance can be recommended to anyone wanting The Seasons in German, performed with modern instruments

how the LSO so instinctively finds the right kind of scale for playing Haydn is miraculous!...Miah Persson as Jane is all innocence and freshness, without the least diminution of tonal fullness; Jeremy Ovenden as Lucas reminds one with his flexibility and lovely open sound of Philip Langridge occasionally (there can be no higher praise); and Andrew Foster-Williams as Simon is a real bass, excelling as ploughman or huntsman and never turning cavernous.

In The Seasons, as Robbins Landon says, old Haydn is “describing things — the first glow of dawn on the horizon, the hazy heat of midsummer, the ripe fields of autumn — which will soon retreat beyond his grasp”. Yet he does so with undiminished energy.

For the unmistakable mark of Sir Colin Davis alone, and a performance under his direction of Haydn's extensive oratorio The Seasons that oozes operatic exuberance and nature-fed optimism at its broadest level, this latest LSO Live disc is genuinely attractive