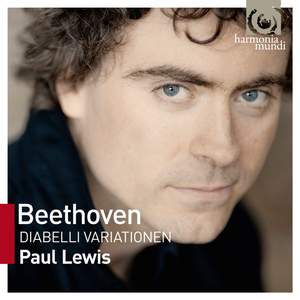 Lewis has the full measure of the work's epic scale, creating a real sense of cumulative growth as he navigates us through its extraordinary narrative...Unashamedly exploiting the warmth and... — BBC Music Magazine, July 2011, 5 out of 5 stars More…

Recording of the Week,  Beethoven's Diabelli Variations from Paul Lewis

Following his masterly traversals of the complete piano concertos and sonatas, the British pianist imbues the Diabelli Variations with humour, exuberance and poetic beauty in a recording which stands comparison with his mentor Alfred Brendel.

Published in June 1823 and dedicated to Antonie Brentano, the 33 Variations Op.120 were described by Diabelli himself as "a great and important masterpiece, worthy to be ranked with the imperishable creations of the old Classics [and to occupy] a place beside Sebastian Bach’s famous masterpieces of the same type". And indeed, Beethoven revolutionised the genre – but, paradoxically, by taking it into the unexpected regions of the bagatelle.

Between 2005 and 2007 Paul Lewis performed all the Beethoven piano sonatas on tour in the USA and Europe, in tandem with his complete recording of the cycle for harmonia mundi. This project earned him two Gramophone Awards in 2008: Recording of the Year and Best Instrumental Recording. In the summer of 2010 he became the first soloist to perform the complete Beethoven Piano Concertos at the BBC Proms in a single season. His studio recordings of the cycle with the BBC Symphony Orchestra under Jirí Belohlávek have since been acclaimed by the international press. From Autumn 2008 until the end of last year he immersed himself in performances of the Beethoven Sonatas, Diabellis and Concertos and there are few UK venues he did not appear in.

Lewis has the full measure of the work's epic scale, creating a real sense of cumulative growth as he navigates us through its extraordinary narrative...Unashamedly exploiting the warmth and power of the modern piano, Lewis marshals a wide dynamic range and employs a considerable variety of touch and timbre...[and] draws particular attention to the radical, almost modernistic nature of Beethoven's writing.

Lewis tells us that the Diabellis are a set of variations like no other. He romps through the opening theme, Beethoven's 'sfz' left-hand asides articulated like raucous, tailgating trombones. Individual variations are masterfully controlled...but Lewis's concept of the whole - how Beethoven seeds ideas that blossom later - makes this performance especially cogent and satisfying.

Nothing in music is more exhilarating than a good performance of the Diabelli Variations, and this one is exceptionally good — torrential but controlled, and intensely lyrical. Never has Beethoven’s monument to creative invention seemed less forbidding. In Lewis’s hands, it gives the sense — despite all its intellectual mastery — of being like a gigantic piece of improvisation...The disc is a delight.

The playing possesses all the dynamism and discretion, the insight and immediacy, that Lewis poured into that grand project of encompassing all 32 of the sonatas, and is essential listening...[Lewis] is a master of characterisation, pointing up Beethoven’s inventiveness as well as his architectural acumen, and playing with palpable concentration and, in the slower variations, with sublime intensity.

he is at his considerable best in those variants that promote grandeur, volatile outbursts, and depth of feeling...Lewis’s performance is superbly recorded (in Berlin’s Teldec Studio), the instrument captured with immediacy, the pianist’s dynamic panache and variety of touch faithfully preserved.

Paul Lewis has the fingers and mind to cope with Beethoven’s undertaking, though he does so in a straight-spined way that emphasises earnestness at the expense of good humour and wit.

Of the many recordings that Beethoven’s exquisite variations have enjoyed over the years, few are as rich in nuance, nimbleness and sheer musical acumen as Paul Lewis’ already-celebrated reading, which must now count as definitive.