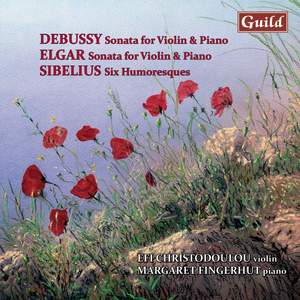 The interest of the disc...is the Sibelius, for this is the first recording of the violin and piano arrangement of the Humoresques made by Karl Ekman...The versions immediately propose themselves... — Sunday Times, 8th May 2011, 3 out of 5 stars More…

Sibelius: Six Humoresques for violin and piano, Op. 87 No. 1: I. Commodo

The year’s 1917/18 proved to be an interesting period for three great composers active at the early part of the 20th century. Up until this time each was known primarily for his orchestral music but in 1917/18 the three composers decided to write for smaller combinations involving the violin. This CD allows a comparison of their respective compositional styles in, perhaps, an unfamiliar context. Debussy was to die soon after completing his Violin Sonata; Elgar wrote three valedictory chamber works beginning with the Violin Sonata within this period before entering virtual creative silence apart from the final masterpiece, the Cello Concerto. Sibelius was to continue his quest for symphonic unity with the final version of his Fifth Symphony before ending his career with the last three big orchestral works, symphonies Six and Severn and finally Tapiola in 1926. These four works place him at the pinnacle of 20th century music.

The interest of the disc...is the Sibelius, for this is the first recording of the violin and piano arrangement of the Humoresques made by Karl Ekman...The versions immediately propose themselves as an indispensable addition to the chamber repertoire, worthy to stand beside Sibelius’s only other significant contribution in this area, the Voces Intimae string quartet.