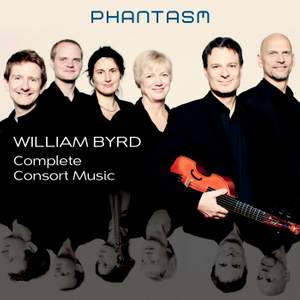 Byrd: Fantasia a 5 in C major

Byrd: In nomine a4

Byrd: Pavan and Galliard a 5

Byrd: Prelude and Ground a 5

The Gramophone Award-winning viol consort Phantasm brings sweetness and sensuality to the English composer’s fantasias, In Nomines and pavans and galliards on Linn Records.

This new recording is the only complete collection of William Byrd’s consort music and includes new hymn settings that are premiere recordings.

Byrd’s viol music is polyphonic and full of melancholy. The performances bring out the rich, overlapping textures of the compositions creating a mesmerising sound.

‘William Byrd Complete Consort Music’ is Phantasm’s second album with Linn; the first, ‘John Ward: Consort music for five and six viols’, was a Finalist in the 2010 Gramophone Awards.

Inspired by the great twentieth-century string quartets, Phantasm enjoys taking risks in its search for renditions that renew the expressive traditions of early music.

Phantasm’s recordings have won two Gramophone Awards, in addition to numerous other international nominations and citations, and are recognised as the most exciting viol consort active on the world scene today.

Director Laurence Dreyfus, who is also an esteemed musicologist, has made the study of 16th and 17th century instrumental music his life’s work. He brings this vast knowledge and immense passion into Phantasm and its recordings.

Phantasm has been made ‘Ensemble in Residence’ at Magdalen College, Oxford, which will enable them to present exciting series of concerts, both in the UK and internationally, in the coming months.

Laurence Dreyfus (himself something of a Renaissance man), combines rigorous intellect with sensitive musicianship...Ensemble and intonation are flawless; keen rhythms and feather-light bowing give a lightness of touch to the dances. The recorded balance is acutely judged, too, ensuring that Byrd's contrapuntal lines are always distinct.

With perfect balance, immaculate tuning and exquisitely mathematical rhythm, phantasm reveal the genius in Byrd. While one viol takes the steady plainsong theme in the In Nomines the others move around it, at first decorously, then, unable to resist, dancingly.

The playing is quite simply divine. Phantasm have long been known for their musical precision, to which they bring to this music a warm, woody, soft-edged articulation that suits it very well. The pacing of individual pieces and sections within them seems particularly sensitively judged and Byrd's textures sublimely balanced.

there is...a sense of richness and interaction between the players which gives everything a warmth and uniformity of sound that is most satisfying.

The Phantasm ensemble, led by musicologist Laurence Dreyfus, have made something of a speciality of Tudor and Renaissance consort music. Here they perform Byrd's whole output of consort works, demonstrating a side to the composer that is not often heard. The counterpoint that characterises his style (particularly in the in nomines) is clearly delineated and the sound is appropriately rich in melancholy.

You’re continually surprised by the potency of Byrd’s musical imagination – the occasional quirky modulation, or the subtle use of dance rhythms which give the music such lift. Linn’s production values are as exceptional as the performances, and this release is also available as a high-quality download. Blissful.