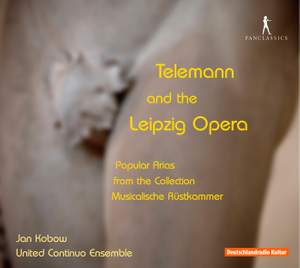 Offer, Telemann and the Leipzig Opera

“Leipzig’s operatic history began with a period of industrious and joyful activity tinged by youthful enthusiasm, suffused with idealism and characterised by certain audacious artistic creations.” These were the words of Arnold Schering in his musical history of Leipzig, on the subject of the first opera house in the city, but for a long time musicologists believed that the opera house had left behind few musical traces. 74 operas were performed in Leipzig between 1693 und 1720, and as recent research has shown a lot of these Baroque works have survived in a manuscript volume called “Musicalische Rüstkammer” (musical inventory) of 1719, which is an anthology of the most popular arias of the time in the city. Jan Kobow and the United Continuo Ensemble present these rousing arias in entertaining fashion.