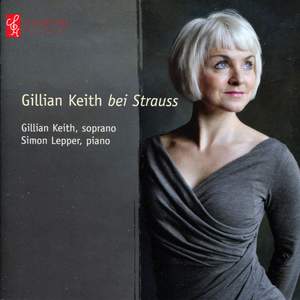 "I thank my Almighty Creator for the gift and inspiration of the female voice." R. Strauss

Strauss displays a consistent ability to bring out the best in a singer, and soprano Gillian Keith - accompanied here by pianist Simon Lepper - amply showcases Straussʼ unique reverence for the female voice.

In song-writing, as in orchestral music, Richard Strauss hit his stride early. His range and confidence is displayed in this group of songs; as the selection shows, he wrote some superb examples in his teens, and by his mid-twenties was already an assured master of the Lied; mastery which continued to develop into old age.

Generations of singers have been inspired by Straussʼ devotion to song; from the dramatic, to the lyric, to the coloratura, Straussʼ songs offer something very special.

In this recital of specially chosen Lieder are many songs which have earned their place in the repertoire, along with less-often heard works such as Mädchenblumen and Drei Lieder der Ophelia, which compliment those more familiar and are at the heart of this recital.

One of Canadaʼs leading lyric sopranos, Gillian Keith made her Royal Opera Covent Garden debut as Zerbinetta in Straussʼ Ariadne auf Naxos, a role she has gone on to repeat with great success. A past winner of the prestigious Kathleen Ferrier Award, she has a natural affinity for Straussʼ music.