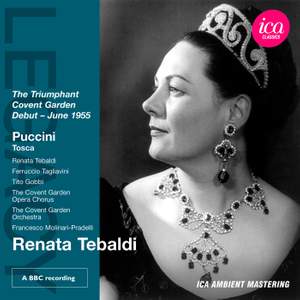 Tebaldi's heady tone is equal to every one of the role's musical demands, while dramatically she proves an engaged and potent heroine...[Gobbi's Scarpia] as always is dramatically thrilling;... — BBC Music Magazine, August 2011, More…

This June 1955 performance of Puccini’s Tosca marked Renata Tebaldi’s first appearance with the Covent Garden Company. The roles of Cavaradossi and Scarpia were filled by two of Italy’s finest singers, Ferruccio Tagliavini (Cavaradossi) and Tito Gobbi (Scarpia). All three went on to make memorable studio recordings for Decca, Cetra and EMI.

The Times wrote on 29 June 1955, the day after the first performance of the revival, ‘The performance was tremendous, not only in the singing, which was up to the heroic standards of the past, but in dramatic tension’. The conductor came in for particular praise, ‘Mr Molinari-Pradelli gave no quarter to his singers and extracted every ounce of power out of the orchestra’.

Of Tebaldi’s Tosca, The Times wrote, ‘With an imposing presence, a fine voice, and a sure judgement of dramatic gesture she made Tosca credible and sympathetic in phrases that were moulded to exploit every intonation of her voice’.

The same critic praised Ferruccio Tagliavini, ‘his voice is generous. his mezza voice is pleasing and his tone does not harden in forte passages’ while Tito Gobbi’s Scarpia was described as ‘an aristocrat corrupted by power’.

Tebaldi's heady tone is equal to every one of the role's musical demands, while dramatically she proves an engaged and potent heroine...[Gobbi's Scarpia] as always is dramatically thrilling; though not the greatest voice for the brutal police chief, Gobbi's baritone arguably provides more theatrical frisson than any other exponent. Francesco Molinari-Pradelli is an idiomatic conductor of very respectable forces.

Tebaldi's voice is remarkably fresh and secure, with all five high Cs in place and offering no problems, the registers perfectly knit and the sound grand, beautiful and womanly...Gobbi, is, of course, sui generis. From his opening, snarling statement in church, through his lascivious, sneering 'Ebbene' and disgusting 'Tosca, finalmente mia' and even beyond, he terrifies.