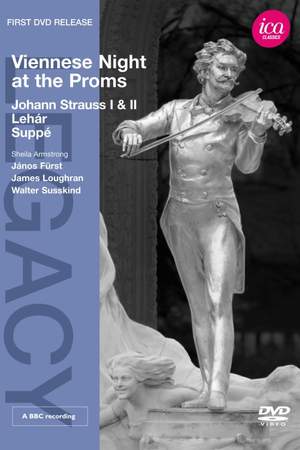 Offer, Viennese Night At The Proms

This compilation DVD features the best performances of Viennese classics from the BBC television archive, spanning a vintage period in the history of the Viennese Night Proms concerts: 1974 – 1979.

Audiences at the Viennese Nights rival the enthusiasm of Last Night Prom audiences, a tradition that has been part of the Proms concert season since 1947 and which draws concert goers from all over the world.

Classics featured on this DVD include the Blue Danube Waltz, Radetsky March and the Csardas and Laughing Song from Die Fledermaus, performed by Sheila Armstrong, who made her Covent Garden debut four years prior to the performances recorded here.

The characteristic Viennese waltzes, polkas and overtures are performed with exuberance, good humour and panache by these three great conductors. Both Susskind and Loughran recorded Strauss and other Viennese composers for EMI, with Loughran succeeding Sir John Barbirolli at the Hallé where Viennese Nights are still a strong tradition.

These performances, released for the first time on DVD, will appeal to a wide cross section of the public with branding targeted at the large Viennese/Strauss market, currently dominated by André Rieu.