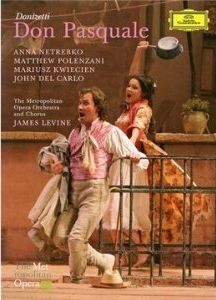 Donizetti's modest little domestic comedy almost sinks under the weight of such production values. That is stays afloat is a tribute to Netrebko who unleashes some fearsome coloratura; and to... — BBC Music Magazine, October 2011, 4 out of 5 stars More…

A red hot ticket at the Metropolitan Opera in 2010/2011 was Donizetti’s comic gem, Don Pasquale, with Anna Netrebko reviving Norina, the part that made her a star in New York. Opera summed up the simple truth: “. . . everyone adored her”.

John Del Carlo’s impressive singing and acting chops as the Don are given every boost by Otto Schenk’s hilarious staging and James Levine’s witty conducting. Leading this opera for the first time at the Met, the renowned maestro demonstrates that his gifts suit Donizetti as perfectly as Wagner. Mariusz Kwiecień and Matthew Polenzani scintillate as Malatesta and Ernesto.

When Norina slaps Pasquale, the old man sees how deluded he has been to believe that the young beauty loves him. The San Francisco Chronicle paid homage to this turning point thus: “Netrebko captures the moment that gives the opera a heart it otherwise would lack”.

Filmed in November 2010, the DVD features backstage intermission interviews caught during the hubbub of performance.

Donizetti's modest little domestic comedy almost sinks under the weight of such production values. That is stays afloat is a tribute to Netrebko who unleashes some fearsome coloratura; and to John de Carlo and Marius Kwiecien, who deliver 'Cheti, cheti, immantinente' with the speed of a Bugatti at full throttle.

With its huge sets and period costumes, Otto Schenk's 2006 production looks like a good old-fashioned Met warhorse, but it still has enough amusing choreography and dramatic truth to keep things ticking along nicely. Anna Netrebko steals the show both vocally and theatrically...but tenor Matthew Polenzani is also terrific as her lover...Levine's conducting is spirited.

[Netrebko] is alert to every note and movement, the voice bigger than the usual soubrette we get in this part, and her top notes gleam...Kwiecien is the ideal playmate for Netrebko: their sounds and styles blend perfectly; both ooze charm...Polenzani's smooth delivery, sweet tone and utter sincerity make him a valuable asset...it's clear that James Levine has the measure of this often witty, occasionally ravishing score.