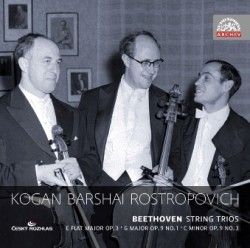 Recorded live at the concert of the 15th Prague Spring International Music Festival at the Rudolfinum, June 2, 1960

And there's freedom aplenty in these vigorous, highly charged performances...These are strong-jawed readings with a great sense of purpose...Another asset to this set is the violinist himself,... — Gramophone Magazine, August 2011 More…

This CD, the latest title within the acclaimed Russian Masters series, presents three towering Russian musicians. At a superb 1960 Prague Spring festival concert, Kogan, Barshai and Rostropovich performed together three of Beethoven’s four string trios. These pieces are seldom played in combination since they require from the musicians a rare combination of virtuosity and humility, as well as mutual respect between the chamber players.

There is no doubt as to the sheer virtuosity of these musicians; at their previous concerts at that year’s Prague Spring all three of them had presented themselves as superlative soloists (at the festival, Rostropovich also performed in Czech premiere Shostakovich’s first cello concerto). Leonid Kogan – one of the most distinguished representatives of the Russian violin school; the violist Rudolf Barshai – co-founder of the celebrated Borodin Quartet and later on a renowned conductor; Mstislav Rostropovich – simply a phenomenal cellist... Three soloists whose encounter on a single stage was a veritable feast for chamber-music lovers and one of the apices of the Prague Spring. Now, half a century later, you too can savour this remarkable concert.

Three legends on one stage – a precious encounter you can again enjoy, half a century on!

And there's freedom aplenty in these vigorous, highly charged performances...These are strong-jawed readings with a great sense of purpose...Another asset to this set is the violinist himself, Leonid Kogan, whose tone is searing in its intensity...this new release captures a compelling moment in history: it must have been some evening!