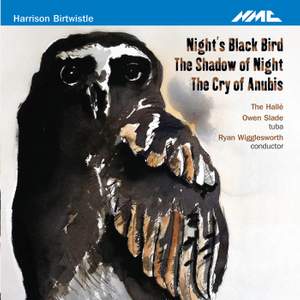 these are among the most powerful orchestral pieces of recent years...Wigglesworth and the Halle give performances of amazing concentration, accuracy and passion, aided by recorded sound of a... — BBC Music Magazine, September 2011, 5 out of 5 stars More…

Birtwistle: The Shadow of Night

Birtwistle: The Cry of Anubis

‘Birtwistle’s most impressive orchestral canvas to date ... Birtwistle comes across as an old master.’ FINANCIAL TIMES ON THE SHADOW OF NIGHT

Sir Harrison Birtwistle is one of Britain’s leading composers and has received many honours, including the Chevalier de l’Ordre des Arts et des Lettres in 1986 and a British knighthood in 1988. He was made a Companion of Honour in 2001 and is currently Director of Composition at the Royal Academy of Music in London.

Owen Slade is one of London’s most versatile tuba players: in addition to his many classical performances, including the premiere performance of Birtwistle’s The Cry of Anubis, he has worked with artists such as Blur, Barry Manilow and Quincy Jones.

Birtwistle is a composer associated with works of forceful and monolithic grandeur so some of you may be surprised by the otherworldly and subtle sound-world of the orchestral works on this new recording.

The Shadow of Night is a slow nocturne, exploring the world of melancholy, inspired by the composer’s life-long fascination with Dürer’s engraving Melencolia I and Night’s Black Bird (commissioned by the Roche Foundation) continues the with the same reflective musical imagery. The Cry of Anubis, part tuba concerto, part tone poem, grew out of Birtwistle’s fascination with Anubis, the jackal-headed god of the necropolis in Egyptian mythology who played an important part in Birtwistle’s surreal recent opera The Second Mrs Kong (1993-94).

This is The Hallé’s first recording for NMC.

This collection of works by Harrison Birtwistle span a period of ten years (1994-2004). All are premiere recordings.

these are among the most powerful orchestral pieces of recent years...Wigglesworth and the Halle give performances of amazing concentration, accuracy and passion, aided by recorded sound of a matching depth and clarity...there's no doubting [Slade's] virtuosity, which encompasses the lyrical as well as the acerbic: yelps and barks remind us that Anubis was the jackal-headed Egyptian god of the dead...Overall an essential release.

In a welcome if rare excursion into contemporary msuic, and recorded with tinglingly immediate atmosphere, the Hallé under Ryan Wigglesworth sound on top form throughout

the wait...has been worthwhile, not least when Ryan Wigglesworth (a composer of real promise) has so evident an affinity with music that can easily become earthbound in less sympathetic hands, with the Halle giving of its best....this performance of [Cry of Anubis] does ample justice to the music's sometimes aggressive but more often wistful melancholy...A disc worth acquiring by Birtwistle sceptics and a mandatory purhcase for admirers.

These three relatively recent works could be by nobody else, yet there is manifest development...The Cry of Anubis is a perfectly plausible tuba concerto, with a superb soloist in Slade. Wigglesworth admirably brings out key detail from fiendishly complex scores.

Ryan Wigglesworth's performances with the Hallé are quite superb, with the intricacies of Birtwistle's instrumental writing always perfectly clear. Alongside these works The Cry of Anubis, for tuba and orchestra, does seem a bit of an occasional piece...but with Owen Slade playing the solo part, it is performed with the same fastidiousness as the other works here.

It’s as though Birtwistle, mellowing as he approached 70, had belatedly discovered his inner Elgar. The Hallé, incisively conducted by Ryan Wigglesworth, play with a dark, almost Edwardian, patina...Portly in sound, never pretty, though with its own warm and lumbering eloquence, the tuba seems the perfect solo instrument for Birtwistle...Owen Slade paints a wonderfully compelling picture of tenebrous rituals deep underground