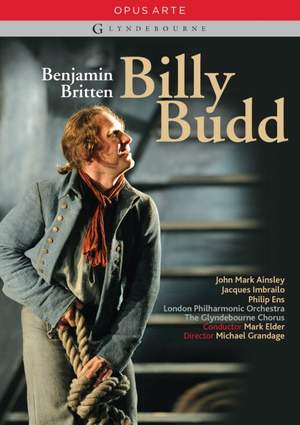 Recording of the Week,  New DVDs from Glyndebourne

South African baritone Jacques Imbrailo is endearing and compelling in the title-role of Billy Budd (directed by Michael Grandage), whilst Gerald Finley is an elegantly rakish Don Giovanni in Jonathan Kent’s 1950s staging.

Glyndebourne has a proud association with the operas of Benjamin Britten, however until 2010 had never staged Billy Budd. The all-male opera with a libretto co-written by EM Forster, is based on the battle between pure good and blind evil, and is set on a British man-‘o-war ship.

This remarkable 2 disc set is available for the price of one.

[Elder paces] the developing tragedy with airily lyrical detail and brooding, ominous power. John Mark Ainsley' s plangent, dark-toned tenor and intense diction show us a more neurotic Vere than usual, ridden with doubts and anxieties...Phillip Ens's Claggart maintains a chilly calm, sadistic philosopher rather than snarling bully...[Imbrailo's Billy] is no plaster saint but gauche, hyperactive and open-hearted...this is the most compelling Billy Budd on video.

Jacques Imbrailo fields just the right youthful lyric baritone and sings Billy's solo below decks beautifully. John Mark Ainsley gets to the heart of Vere, every close-up showing an artist immersed in his role, and Phillip Ens sings gravely as a Claggart who seems sadly resigned to his lot, rather than an active force of destruction.

Elder's unerring sense of theatre puts him absolutely at one with the stage in every episode. He's clearly the guiding spirit of this Billy Budd. The production has been directed with laudable unobtrusiveness by Michael Grandage. Everything is executed with the utmost sensitivity, and there are some telling original touches...Video director Francois Rousillon does exceptional work here, with the precision of HD a constant pleasure. Opus Arte's recorded sound is superb

The set, singing and acting are all superb in this outstanding 2010 Glyndebourne production by Michael Grandage. The theatre virtually becomes 'HMS Indomitable', and the claustrophobic atmosphere transfers beautifully from stage to screen. The lithe young South African baritone Jacques Imbrailo redefines the title-role, whilst Mark Elder paces the musical drama with a sure hand.

the realisation of the decks of a man-o’-war seem even more claustrophobic than it was at Glyndebourne. The casting is immaculate, the choral singing is overpowering, and you can almost feel the salt spray flying off Mark Elder’s magnificent conducting.

none of the camera’s interventions disturb the sweep of Michael Grandage’s carefully realistic production...you’re still sucked inside the drama, especially if you watch on a widescreen TV...[Imbrailo] is as ardent and puppyish as you could wish...the London Philharmonic revel in the baleful drums, salty woodwinds, and dark beauty of Britten’s score. On DVD as much as in the opera house, this is a Billy Budd to remember.

Truly, we live in a golden age of great opera recordings where a performance of Britain’s masterpiece -- perhaps his greatest operatic achievement outside Peter Grimes -- can be set down in an edition as exemplary as this. Singing, staging and recording are all non-pareil.