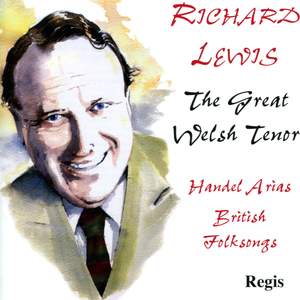 Handel: Joshua: Recit. So long the memory shall last - Air. While Kedron's brook

Handel: Acis and Galatea: Air. Would you gain the tender creature

Handel: Jephtha: Arietta. For ever blessed

Handel: Judas Maccabaeus: Recit: Thanks to my brethren - Air. How vain is man

trad.: All through the night

trad.: David of the White Rock

trad.: I will give my love an apple

trad.: O Love, It Is a Killing Thing

trad.: There's None to Soothe

Richard Lewis was one of the most successful British tenors of his generation who enjoyed a truly international career. He had a particular affinity with Handel and Elgar and while he made numerous ensemble recordings, his solo output was relatively small. Regis presents two LP recordings on one CD – Handel Arias and Folksongs of the British Isles - the only recital disc of Richard Lewis available in today’s market.