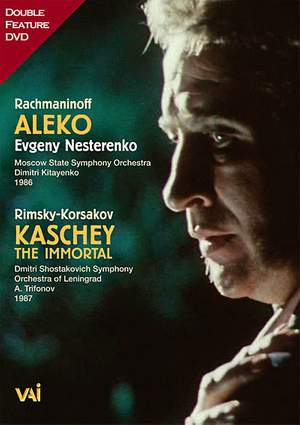 Aleko and Kaschey the Immortal

A “double bill” of two Russian operatic masterpieces. Legendary bass Evgeny Nesterenko stars in the title role of Aleko (1892), an early work of Sergei Rachmaninoff (1873-1943), written the composer was still a student at the Moscow Conservatory. Strongly influenced by the Italian verismo school (the plot is a close relation to that of Leoncavallo’s Pagliacci), the score is full of colorful evocations of Gypsy life and passionate emotional outpourings. The cast of this expansive 1986 film version, directed by Victor Okuntsov, includes members of Gypsy folk ensembles, adding to the production’s striking authenticity. The Moscow State Symphony Orchestra and Gosteleradio Chorus are under the direction of Dimitri Kitayenko.

By contrast, Kashchey the Immortal (sometimes called Kashchey the Deathless) is very much a mature work of Nikolai Rimsky-Korsakov (1844-1908); it was the composer’s twelfth opera, and premiered in 1902. Moreover, its mythic setting and magical storyline (drawn from the same Russian folk tale that inspired Stravinsky’s ballet The Firebird) are worlds away from Aleko’s gritty realism. This 1987 Russian film version stars the great singing actor Konstantin Pluzhnikov in the title role (Pluzhnikov is also the Kaschey in the acclaimed CD recording conducted by Valery Gergiev). Directed by Oleg Yeryshev, the film goes far beyond what could be achieved in a stage production, adding clarity, depth, and spectacle to this poignant fairy tale.

Subtitles in English and Russian