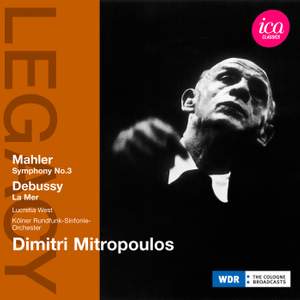 These performances, taken from 1960 radio broadcasts, were the last Mitropoulos gave. During the symphony’s huge first movement, he suffered a heart attack; and, though he went on conducting,... — Sunday Times, 8th May 2011, More…

Dimitri Mitropoulos (1896–1960), a most distinguished Mahlerian, was one of the great conductors of his generation, the music director of the New York Philharmonic and a frequent guest conductor of the Vienna and Berlin Philharmonics as well as La Scala, Milan.

This Cologne performance of Mahler’s Symphony No.3 from 31 October 1960 is the only complete performance of the work conducted by Dimitri Mitropoulos, the only other being his 1956 broadcast with the New York Philharmonic which is distorted by cuts and amendments.

It is the only officially released recording of Mitropoulos’s performance and together with Debussy’s La Mer, is sourced from WDR’s own master tapes.

The Cologne concert took place two days before Mitropoulos’s death in Milan on 2 November 1960. The set is completed by Mitropoulos’s outstanding interpretation of Debussy’s La Mer. A worthy document of a great condutor.

These performances, taken from 1960 radio broadcasts, were the last Mitropoulos gave. During the symphony’s huge first movement, he suffered a heart attack; and, though he went on conducting, he died two days later... Yet this account is still fine enough to reveal his mastery of Mahler and his rapport with the Cologne orchestra, shown also in a brilliant, mercurial La Mer.

part of the fascination of this 1960 live performance is hearing the Cologne orchestra tackle what was then very unfamiliar repertoire. The playing is occasionally rough and imprecise, but it’s also wonderfully exciting. Mitropoulos seamlessly knits the kaleidoscopic first movement together, the trombone solo raw and passionate, the marching band sections rowdy but tightly controlled.