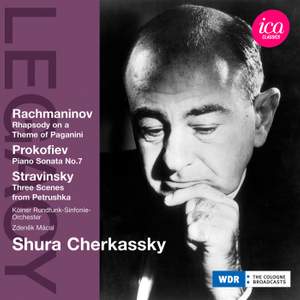 the pianist’s irrepressible spirit shines through in Prokofiev’s Seventh Sonata and the Stravinsky pieces. — The Telegraph, 12th May 2011, 3 out of 5 stars

Shura Cherkassky (1909–1995) was one of the greatest piano virtuosos of his time having studied under the legendary Josef Hofmann.

This WDR studio broadcast sourced from the original master tapes has Cherkassky playing Rachmaninov’s Rhapsody on a Theme of Paganini from 1970 in superb stereo. He recorded the Rhapsody only once in 1953 for EMI in mono but it has never been issued on CD so this taping is exceptionally important and adds a major work to Cherkassky’s large discography.

Prokofiev’s wartime Piano Sonata No.7 was never recorded commercially by Cherkassky so this is another addition to his discography sourced from WDR’s original master tapes. It was recorded in 1951 when Cherkassky was fast becoming a star in Germany.

The three scenes from Stravinsky’s Petruschka was a favourite virtuoso work for Cherkassky and this 1951 recording shows him at his most brilliant, sourced from WDR’s original master tapes. Three encores have been added from 1951 and 1953 (not sourced from WDR) which again showcase Cherkassky’s incredible technique during the early period of his career in Germany. Note that Cherkassky never recorded Chabrier’s Bourrée Fantasque commercially.

the pianist’s irrepressible spirit shines through in Prokofiev’s Seventh Sonata and the Stravinsky pieces.