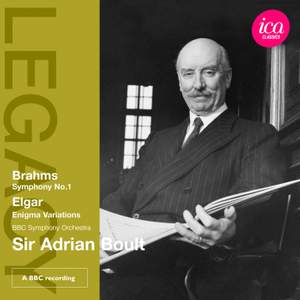 These performances would surpass all superlatives under any circumstance, but what makes them especially incredible is that, despite Boult being in his nineties, they sound like the interpretations... — Classic FM Magazine, August 2011, More…

Sir Adrian Boult (1889–1983), one of the great British conductors of the 20th century, who studied under the legendary Arthur Nikisch in Berlin which make his Brahms interpretations so special.

This fiery 1976 Prom stereo broadcast of Brahms 1 is the only authorised live account available. He recorded the symphony three times in the studio.

The live stereo broadcast of Elgar’s Enigma Variations was sourced from the Royal Albert Hall Centenary Concert on 29 March 1971 and features the alternative organ part played by George Thalben-Ball, one of the most celebrated organists of his time.

The CD is completed by an extract of an interview Boult gave on the occasion of his 85th birthday where he talks about the art of interpretation.

These performances would surpass all superlatives under any circumstance, but what makes them especially incredible is that, despite Boult being in his nineties, they sound like the interpretations of a young man...Many recordings have been released since these first appeared, and yet one would be hard-pushed to name any that can truly top them.

this Brahms 1 is superbly paced: hard-driven yet flexible, virile yet richly expressive. The opening’s 6/8 — relentless, tragic — has, rightly, the same pulse as the ensuing allegro (where Boult, unusually, observes the repeat). In Elgar, Boult could sometimes misjudge tempo, but not here. From the theme onwards (exquisitely judged), his touch is sure and masterly.