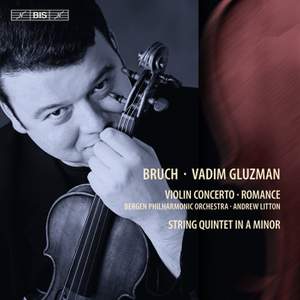 [Gluzman] presents a refreshingly straightforward performance that allows the music to speak for itself. The playing is indeed superb in every way, wonderfully lyrical in the soaring melodies... — BBC Music Magazine, July 2011, 5 out of 5 stars More…

Bruch: String Quintet in A minor

Following on from his recordings of the concertos by Tchaikovsky (‘without doubt one of the work's finest recordings in recent years’, BBC Music Magazine), Barber and Korngold, The virtuosic violinist Vadim Gluzman here performs a giant of the violin repertoire: Max Bruch’s Violin Concerto No.1.

Throughout his 82-year life, Bruch remained true to the musical ideals of his youth, formed by Schubert, Mendelssohn, Schumann and German folk songs. His Violin Concerto No. 1 was a spectacular success from its first performance in 1868, and soon won over audiences both in Germany and abroad.

Gluzman also performs the violin version of the Romance in F major, Op.85, composed by Bruch for viola and orchestra. The composer also made an arrangement for violin and piano, and it is this violin part which Gluzman performs to the original orchestral score.

Closing the programme is the String Quintet in A minor in which Gluzman is joined by four eminent string players: Sandis Šteinbergs, Maxim Rysanov, Ilze Klava and Reinis Birznieks. Composed in 1918, the youthful energy, dramatic instinct and playful exuberance of the quintet equally belies the fact that it was composed by a man in his eightieth year.

Gluzman is supported by the eminent Bergen Philharmonic Orchestra and its music director Andrew Litton.

[Gluzman] presents a refreshingly straightforward performance that allows the music to speak for itself. The playing is indeed superb in every way, wonderfully lyrical in the soaring melodies of the slow movement, impassioned and dramatic in the opening Prelude and exuberant in the Finale. Andrew Litton and the Bergen Philharmonic are sterling accompanists, responding with subtlety to Gluzman's nuanced phrasing.

Gluzman embraces [the Concerto's] emotion and character with such passion it's as though this is a new discovery for him, with freshness, vitality and in the final, great pace and wonderful rhythms. But the heart of the work is the Adagio, and here Gluzman delivers the melody with breathtaking intensity

This performance of the Quintet is robust and confident. High-powered playing and a resonant recording combine to create an almost orchestral sound. Vadim Gluzman plays the finale's virtuoso passages magnificently

Gluzman is a wonderful player and the combination of peerless technique and an eloquent and flexible approach to the score makes for a refreshing and absorbing account of this much performed work. With Gluzman it becomes a most rewarding rediscovery...Litton and the Bergen Philharmonic are truly attentive partners; their committed support does much to make this one of the most engaging recent performances of this concerto