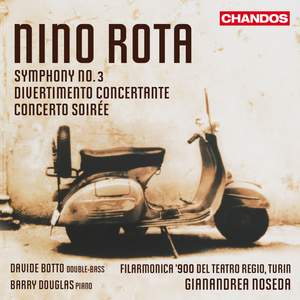 Barry Douglas makes the most of a piano part that eschews heroics but responds to sympathetic and intelligent musicianship. All the participants sound as if they're enjoying themselves hugely.... — BBC Music Magazine, September 2011, 4 out of 5 stars More…

Nino Rota is today best known as a composer of film music – and he probably always will be, or for at least as long as classics such as Fellini’s La Strada, La dolce vita and 8 1/2, Visconti’s The Leopard, and Coppola’s The Godfather remain in circulation. It is all too easy to forget Rota’s sizeable contributions to the concert hall and the theatre, but he also composed dozens of piano pieces, all kinds of chamber and orchestral music, numerous choral works, and no fewer than eleven operas and five ballets.

The concert music by Rota on this recording is every bit as tuneful and entertaining as his many film scores.

All the works are idiomatically performed by largely Italian forces: the Filarmonica '900 del Teatro Regio, Turin, is conducted by Gianandrea Noseda. Rota’s first two symphonies, both of which originated in the late 1930s (recorded on CHAN10546), are direct descendants of the romantic tradition. Composed in 1956 – 57, Symphony No. 3 (recorded here) is generally less serious in content, and written in a lighter and essentially neoclassical style.

The CD also includes Rota’s Divertimento concertante for double-bass and orchestra, with the Italian double-bass player Davide Botto as soloist. This work was originally written for the Italian virtuoso Franco Petracchi, and offers in the first movement a reminder of the instrument’s extraordinarily wide pitch range as it covers nearly four octaves. Rota then takes us on a journey, in which the hero, the double-bass, performs a cheerful burlesque march in the second movement, before taking on a more lyrical role in the third movement. The finale opens with a sprightly tune that inspires the double-bass to challenge the woodwind in agility, but also in terms of high-pitched brilliance.

The Concerto soirée is in a category of its own. It is best described as a piano concerto written in the spirit of Rossini’s Soirées musicales, in which new and exclusive Chandos artist, Barry Douglas, as soloist is required not to perform virtuoso feats in a romantic grand manner, but rather to amuse himself and the orchestra with a variety of sociable ideas. The result is a work which is lively and light-hearted.

Barry Douglas recently joined Chandos as an exclusive artist, and this is his first recording on the label. Since winning the Gold Medal at the 1986 Tchaikovsky International Piano Competition in Moscow, he has established a major international career. He is the Artistic Director of Camerata Ireland, and the Clandeboye Festival and Castletown Concerts in Ireland – and as a soloist, he regularly performs with such orchestras as the Orchestre philharmonique de Radio France, Duisburger Philharmoniker, Rundfunk-Sinfonieorchester Berlin, Ulster Orchestra, and the London, City of Birmingham, Cincinnati, Singapore, BBC, Baltimore, and Atlanta symphony orchestras.

His forthcoming releases on Chandos include Volume 1 in a Brahms piano recital series, due out 2012.

Barry Douglas makes the most of a piano part that eschews heroics but responds to sympathetic and intelligent musicianship. All the participants sound as if they're enjoying themselves hugely. In its way, irresistable.

Gianandrea Noseda secures a highly sympathetic set of performances, his Turin forces responding in consistently heartwarming and agreeably spick-and-span fashion. Both soloists, too, acquit themselves with distinction

Barry Douglas plays with admirable clarity and fondness, careful not to upset the precisely crafted balance between piano and orchestra... Three very engaging works, then, performed with skill and affection, excellently recorded and with good presentation.