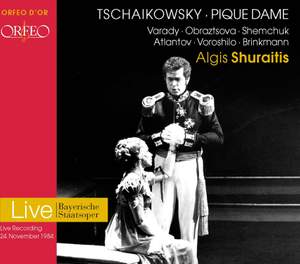 [Varady is] in radiant voice here, convincingly youthful and appealing at her first encounter with Herman, throwing caution to the wind as she goes to her death in the Neva. Vladimir Atlantov's... — Gramophone Magazine, September 2011 More…

In contrast to Eugene Onegin, Tchaikovsky’s other operas have led something of a shadowy existence in the repertoire. Only his penultimate music drama The Queen of Spades (also after Alexander Pushkin) can claim to look back on a continuous performing tradition in recent decades. In 1984 the Bavarian State Opera gave a production that was musically exemplary in many ways, starting with the role of Lisa, sung by Julia Varady. She had already been celebrated in Munich for her portrayal of Tatyana in Onegin, and here again she showed herself to be the ideal interpreter for one of Tchaikovsky’s female roles. She savoured the lyrical aspects of the part with the utmost subtlety, while in the tragic plot twist on the banks of the Neva she showed herself a match for its dramatic climaxes. Her vocal portrait of the self-sacrificing young lover Lisa can at last be heard here on CD. Her partner Vladimir Atlantov had to master one of the most murderous tenor roles and did so brilliantly. During the course of his international career, it was above all with Tchaikovsky’s Hermann and with Verdi’s Otello that he truly succeeded in making his mark in a manner that has been remembered long after. There has rarely been another singer able to portray in so gripping a fashion the increasing intensity of Hermann’s passion for Lisa, up to the point of his deadly obsession to win her by means of the “secret of the three cards”. The old Countess is sung by the mezzo-soprano Elena Obraztsova, like him another of the great voices from the former Soviet Union. They were joined by several further compatriots: Polina was sung luxuriantly by Ludmila Shemchuk, Count Tomsky by Alexander Voroshilo, and last but not least Algis Shuraitis was at the helm of the Bavarian State Opera to ensure that their joint efforts were crowned by the creation of an idiomatic cast for this production of The Queen of Spades. The ensemble, chorus and orchestra of the Bavarian State Opera contributed above and beyond the call of duty to the success of it all, playing and singing with fire and verve, and they well deserve an honourable mention here.

[Varady is] in radiant voice here, convincingly youthful and appealing at her first encounter with Herman, throwing caution to the wind as she goes to her death in the Neva. Vladimir Atlantov's Herman is a known quantity but it is good to hear again how fearless he could be onstage...there is a grandiloquence about his portrayal here that can be thrilling.

Varady retains her appeal, thanks to splendidly clear textual projection, prbing musicality and a delectably youthful timbre...The truly aching expressiveness of this singing is just right for Lisa, and significantly more affecting than anyone I've heard on disc in this role...[Obraztsova holds] the listener's attention through sheer incisiveness of projection...the performance is immensely disciplined and never frantic.