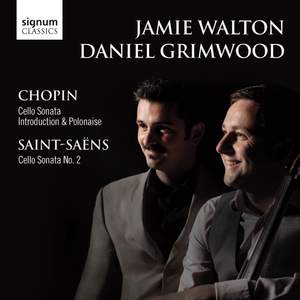 Walton's sound in this excellent recording is open and luminous. Daniel Grimwood is more than a match for his extravagant part [in the Saint-Saens]...There's plenty of Mendelssohnian magic here... — BBC Music Magazine, September 2011, 4 out of 5 stars More…

Two works from very different composers: Chopin’s works for cello were few and far between, but these two straddle his compositional life: the Introduction and Polonaise was written in 1829 when he was just 19, and the Cello Sonata of 1845-6 is his last work published during his lifetime: all latter works with opus numbers being published posthumously, against his wishes. By contrast, Saint-Saëns published a great many works for the cello, as well as works in almost every genre of the classical canon, with the Cello Sonata No.2 composed during his travels in Biskra, Algeria.

Jamie Walton and Daniel Grimwood are performers who have proven themselves, in both concert and recordings, to be formidable and enthralling interpreters of the classical canon. This release follows their previous duo disc of Rachmaninov and Grieg cello sonatas on Signum.

Walton's sound in this excellent recording is open and luminous. Daniel Grimwood is more than a match for his extravagant part [in the Saint-Saens]...There's plenty of Mendelssohnian magic here in both the lazily eloquent and fleet-footed variations, and an infectious sense of enjoyment...Their fine performance of Chopin's great Sonata clears its technical hurdles with ease.

Jamie Walton is alive to the twists and turns of Saint-Saens's imagination and brings to the sonata a warm, rich sound that is initially very persuasive, ably supported by Daniel Grimwood, who surmounts the considerable challenges of the piano-writing with ease and musicality.

Jamie Walton’s mature cello timbre and perceptiveness in matters of interpretation are winningly applied to this coupling of two 19th-century sonatas. His musical partnership with Daniel Grimwood brings special immediacy and finesse to these performances...Finely honed stylistic judgment here goes hand in hand with re-creative panache.

intensely passionate performances of two of the most overtly romantic cello sonatas. The Saint-Saens Second is here full of heroic power, its long lyric passages sweeping forward in a golden glow of cello tone. Grimwood’s piano makes a powerful partner that continues in a rhythmically pliable and vigorous reading of Chopin’s neglected score. Excellent recording that perfectly captures the beauty of Walton’s playing.