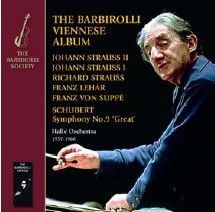 In the Free Trade Hall, at Belle Vue and in the Royal Albert Hall the Viennese Nights were occasions which gave intense musical pleasure and also had a remarkable atmosphere of bonhomie. Sir John could relax, but he never relaxed his artistic standards and he treated the waltzes and polkas as masterpieces of their kind which demanded and deserved top rank treatment. His recording sessions on 30 and 31 December 1966 included Johann Strauss II’s Blue Danube waltz, Perpetuum mobile and Gypsy Baron overture and Johann Strauss I’s Radetzky March in Gordon Jacob’s orchestration. To these are added Strauss II’s cork-popping Champagne Polka and the Thunder and Lightning Polka. No Barbirolli Viennese evening would be complete, of course, without Lehár’s Gold and Silver waltz (1902), performed with especial sumptuousness.

From the 1957 Pye sessions come six items by Franz von Suppé, the Austrian composer and conductor of Belgian descent who sealed in Vienna in 1835 where five years later he became third conductor at the Theater in der Josefstadt. In 10 years there, he wrote over twenty scores, including Morning, Noon and Night in Vienna, in which he proved himself in the line of Johann Strauss I. He moved to the Theater an der Wien in 1845 as one of its chief conductors for the next 17 years, after which he went to Kaitheater in 1862 and the Carltheater in 1865 where he remained until his retirement in 1882. His Queen of Spades overture was for a one-act comic operetta, first staged in Berlin, and The Jolly Robbers (Banditenstreiche) for yet another in 1867. Perhaps his best-known and most popular pieces are the Light Cavalry overture and the Poet and Peasant overture. Of all his stage works, only Boccaccio is seen with any regularity today, although he was regarded in his lifetime as Vienna’s answer to Offenbach. But the overtures survive and are ideal Barbirolli Viennese material.

The other Strauss in this album is the German, Richard. He is represented by Barbirolli’s suite of waltzes from his most popular opera Der Rosenkavalier which Barbirolli often conducted with the Covent Garden touring company in the 1930s. Sir John never conducted this particular compilation in the concert-hall although he often conducted a suite, probably arranged by Artur Rodzinski, which includes the Presentation of the Rose and the trio in orchestral disguise and can be heard on ‘Barbirolli at the Opera’ (SJB1004). It is interesting to note that Strauss himself made only arrangements of the waltzes for concert performance. Barbirolli recorded this rarity of his own in the December 1966 sessions for Columbia Studio 2. Sir John made two recordings of Schubert’s Great C major Symphony, the first in December 1953 (Barbirolli Society SJB1020) and the second (issued here) in June 1964, also for HMV.