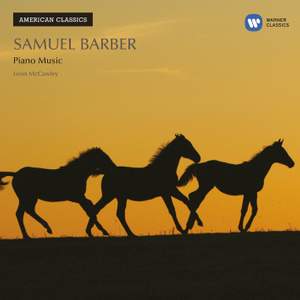 This programme of piano works by one of America's foremost 20th century composers will make an ideal companion disc to the four others already in this series. Leon McCawley is a British pianist, born 1973, who studied at the Curtis Institute in Philadelphia, the same conservatory that Barber himself attended for lessons in piano, composition and voice. Excursions, Op.20, was written during the years 1942–44 and is the only work in which Barber adopted a style that might be termed 'American', with it's use of boogie-woogie, blues, a cowboy song and hoedown. The Op.26 Piano Sonata was written in 1949, when it's première was given by Vladimir Horowitz. It has since maintained a prominent position in the repertoire. The Souvenirs, Op.28 of 1952 exist not only in two piano versions but also as a ballet score. In these short and easily appealing pieces Barber adopts a style somewhere between Satie and Prokofiev but, in all essentials, remains true to himself. Although, after the 1966 failure of his third opera Antony and Cleopatra, Barber continued to compose, his music became far more reflective and concentrated. The Ballade, Op.46, from 1977, is a fine example of Barber's later music.