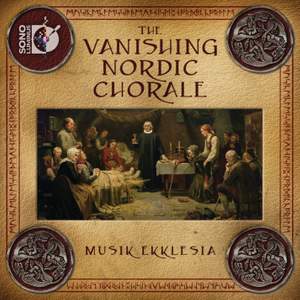 There is something enchanting about this disc that opens it up to a wider circle of listeners than those who just want to hear the aria 'Lobet den Herren' from Bach's Cantata No. 137 sung in... — Gramophone Magazine, November 2011 More…

Sono Luminus presents nothing less than a revelation of the Scandinavian musical soul: chorale settings by Northern Europe’s greatest composers performed by some of America’s finest period performers. In The Vanishing Nordic Chorale, Musik Ekklesia brilliantly refracts the nordic chorale tradition through the prism of history, yielding a kaleidoscope of nuanced color and florid display.

Four hundred years ago, individuals traveled — if they traveled at all — only by the strained effort of foot and beast, wind and sail. Communication beyond the sound of their voices required hand-writing and hand-delivering. Even so, across Northern Europe, something unlikely was occurring. The musical memory of the Nordic people was becoming embodied with an identical opus of melodies. Average people, from Trondheim to Leipzig, participated weekly in the performance of the same tunes, each sung in their own language. These were ‘chorales’ (or hymn tunes) which formed the basis of congregational worship in the state-run churches beginning during the Nordic Golden Age of the Reformation.

The Vanishing Nordic Chorale presents 14 of these melodies sung in Nordic languages: the lilt of Swedish, the angled turn of Norwegian, and the gentle kneeding of Danish offer listeners a music all their own. In this collection, simple eight-bar chorale tunes have not been doggedly repeated merely to span their many verses. Instead, Musik Ekklesia director Philip Spray has exploited a variety of techniques to feature these tunes in situ as it were, either by selecting whole works of composers that incorporated the tunes — as in Bach’s alto aria from Cantata 137, Mendelssohn’s Forlen os freden, and Nielsen’s Denne er daget — or by taking one composer’s work on a short chorale verse, such as Pachelbel’s organ arrangement of Du er, opstandne sejerhelt, here arranged for various groups of baroque instruments, and setting it against a ritornello (i.e., Bach’s orchestral prelude to Cantata 99), or du Caurroy’s verses, similarly set alongside a well-known Noël by Charpentier as their ritornello. Spray has also borrowed chorale tunes from the Danish, Swedish or Norwegian Chorale Books and arranged them for voices and various consorts of instruments.

Musik Ekklesia is a baroque period-instrument ensemble based in Indianapolis that draws leading players from around the United States and abroad. In this recording, old instruments are used not solely for historical recreation, but for their unique, timeless timbre and appropriateness to the folk-like character of some of the musical material. This album is sure to delight classical and early music lovers, as well as light the fire and spirit of the far north in the listeners.

There is something enchanting about this disc that opens it up to a wider circle of listeners than those who just want to hear the aria 'Lobet den Herren' from Bach's Cantata No. 137 sung in Norwegian...[Spray] has resurrected a good many examples of cross-fertilisation that make for a thoroughly appealing sequence...The American soloists and chorus, drilled by diction coaches, sound like they're at ease with the languages and sing with fluency and clarity.