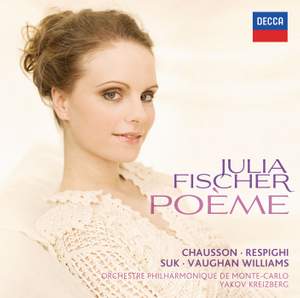 The intelligently constructed programme is the most intriguing the pair have produced...Aside from the occasional woolly texture, support from Kreizberg's Monte Carlo Philharmonic is superlative...This... — BBC Music Magazine, June 2011, 5 out of 5 stars More…

Julia Fischer follows her extraordinary Grammy-nominated recording of the fiendish Paganini Caprices with a contrasting album − a lyrical and poetic set of impressionistic works for violin and orchestra.

Comprising four substantial pieces, this unique program is headed by Suk’s virtuosic Fantasy, a mini-concerto that is now justifiably finding its way into the concert repertoire. It is accompanied by two well-known tone poems – the elegant Poème by Chausson and the English pastoral The Lark Ascending by Vaughan Williams. The album is completed by Respighi’s Poema autunnale (of which there is only one other recording in the catalogue), making the program truly multinational.

For this recording, Julia Fischer is joined by her long-term colleague on the podium, Yakov Kreizberg, directing his own orchestra, the Monte-Carlo Philharmonic Orchestra − with whom Julia Fischer has a very close artistic relationship as artist in residence for the 2010/11 season.

Critical acclaim for the Paganini album: She plays “with lyricism, digital brilliance and incredible finesse” (The Observer).

The intelligently constructed programme is the most intriguing the pair have produced...Aside from the occasional woolly texture, support from Kreizberg's Monte Carlo Philharmonic is superlative...This beautiful disc is one of Fischer's best, and also stands as a fitting testament to Kreizberg's art.

probably the finest [Lark] on record...Fischer's detailing of the avian solo line is so filled with little wonders and fresh insights that it is almost like discovering the music for the first time...Kreizberg and his Monte Carlo orchestra follow every fluctuation in Fischer's free-flowing solo line so that the orchestra and the soloist really do appear as one...This exceptional recording is a fitting tribute to a great musical partnership.

Chausson's Poeme thrives on the sort of fluent dialogue that Fischer and Kreizberg achieved as a matter of course and, although Fischer's playing is charged with emotion, she's placed in a sensible relation to the orchestra...Kreizberg's witty handling of the variations section [of the Suk] really made me smile...Fischer's tonally alluring, full-blooded performance sits perfectly within the context of an imaginatively chosen prgramme

Fischer's Chausson Poeme is lovely, with a finely spun solo line and impeccably judged double-stopping: it's passionately projected without the sound ever being forced. The orchestral support here has real fervour...Fischer is characteristically subtle [in The Lark] and she pays careful attention to detail...[She] is an engaging, sensitive soloist, possessing a fabulous technique, and the programme is very enjoyable.

The Suk dazzles, the Chausson is restrained yet passionate, the Respighi beautiful in the extreme. Kreizberg's conducting, meanwhile, is notable for the emotional subtleties and fastidious sense of colour and line that characterised his best work. Touching and very fine.

Four nationalities, four moods, but linked by a common late-Romantic, poetic sensibility. All are warmly performed by Fischer and the Monte-Carlo orchestra. The CD makes a fine memorial for conductor Yakov Kreizberg, who died at an early age last month.

The programme...needs close rapport between soloist and orchestra. Here Fischer was lucky, for her conducting partner — for the last time alas — is Yakov Kreizberg...[who] cradles Fischer very tenderly, particularly in the Respighi...Fischer’s golden moments? Her singing line in the Respighi. Twinkling and darting in the Suk. And definitely her lark: nature enthroned in simple glory. May she long continue to enchant us.