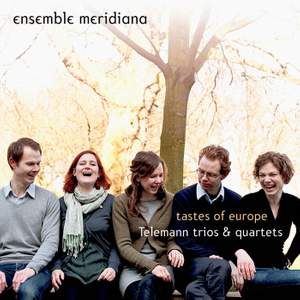 Telemann: Concerto in A Minor for Recorder, Oboe, Violin and Basso Continuo, TWV43:a3

Ensemble Meridiana’s win at the prestigious biennial York Early Music International Young Artists Competition, renowned for launching the careers of many notable musicians and groups including the award-winning Palladian Ensemble, led to this debut recording, ‘Tastes of Europe - Telemann Trios and Quartets’.

Telemann embraced many national styles in his trios and quartets. The result is an amalgamation of German, French and Italian stylistic elements with which he created a kaleidoscope of sounds taking the listener on a musical tour throughout Europe.

Polish folk music is incorporated into the lively Trio in D minor, a work widely attributed to Telemann and still categorised with a TWV number, but recently discovered to be the work of German organist Pierre Prowo (1697-1757).

A contemporary of J.S. Bach and Handel, Telemann (1681-1767) is considered one of the most prolific composers of his time. Throughout his career Telemann remained at the forefront of all musical developments and his music provides an important link between the late Baroque and early Classical styles.

The five members of Ensemble Meridiana met during their studies at the Schola Cantorum in Basel, Switzerland where they specialised in Baroque music.

In February 2011 the ensemble won first prize in the Handel Competition in Germany, their third international competition win.

Originating from the United Kingdom, Norway, Sweden and Switzerland, Ensemble Meridiana is an exciting, versatile and energetic young group of musicians who have performed at King’s Place. London, and the York Early Music Christmas Festival to critical acclaim.

“An exemplary active continuo…the upper voices ornamented pleasingly, played well together and shaped the music in an exciting and very transparent way.” Toccata

“A very talented group of musicians display both the technical prowess but also the musical insight to bring life to the music.” Early Music Review, February 2011

The strongly contrasting period instrument timbres create tension in these virtuosi's hands. In the Trio in F, the cooing, naive recorder opposes the gamba's nimble whine...They blend best in the fugue of the A minor Concerto which pumps along with joyfully complex precision.

tempi are generally quite quick but never driving, their slow movements invariably graceful.