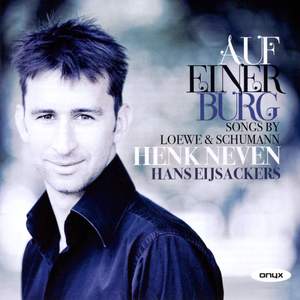 Neven possess a lightly textured, attractive voice, and his diction is focused and expressive — BBC Music Magazine, July 2011, 3 out of 5 stars More…

Henk Neven has performed at the BBC Proms and at the Wigmore Hall. He also has a busy career in the opera houses of Europe, including Leporello in Don Giovanni in De Doelen Rotterdam, Patrocle in Iphigénie en Tauride by Gluck at La Monnaie in Brussels, Ottokar in Der Freischütz in Theater an der Wien, Mercutio in Roméo et Juliette at De Nederlandse Opera and Gralritter in Parsifal in Het Concertgebouw Amsterdam.

As a recitalist he will appear with Hans Eijsackers in de ‘Vocale Serie’ of Het Concertgebouw, La Monnaie Brussels and de Beurs van Berlage Amsterdam.

This is his debut recording, and he has selected Lieder by Carl Loewe to programme with Schumann’s Liederkreis op22, repertoire he loves performing. Neven is a major new vocal talent.

Neven possess a lightly textured, attractive voice, and his diction is focused and expressive

His gift of bringing out word-meaning is enhanced by the clearest possible diction and by the beautifully balanced recording. His shading of dynamics and phrasing then crowns each interpretation. It is a consistent joy to hear a Lieder singer whose tone is pure over the widest range without a trace of roughness...It is a long time since I enjoyed a disc of Lieder from a young singer quite as much as this, and I long to hear more from him.

[Neven] has a beautiful voice, flexible, rounded and warm, and sings, always in the middle of the note, with much intelligence and no affectation...both Neven and his excellent accompanist Hans Eijsackers manage almost to avoid sentimentality

Neven’s highly individual timbre is unlike any other lieder interpreter’s; he sings with astonishing technical finesse, verbal acuity and a youthful sense of wonder in these pieces from Schumann’s annus mirabilis of song, 1840...Eijsackers’s virtuoso piano-playing only enhances this remarkable young singer’s outstanding debut.