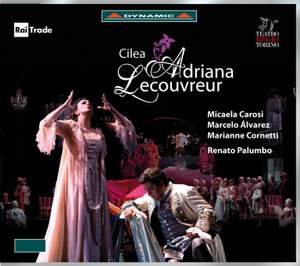 the outstanding impression is of a mostly Italian cast who deliver the goods with gutsy native confidence...As Adriana the famous actress [Carosi] decaims her lines in high melodramatic style...[Cornetti]... — Gramophone Magazine, July 2011 More…

Adriana Lecouvreur is the opera that brought definitive international fame to Francesco Cilea.

This CD was recorded at a production from the Teatro Regio Di Torino in 2009 that featured a first-rate cast; the Princess de Bouillon is sung by mezzo-soprano Marianne Cornetti, one of the most in-demand representatives of her vocal category. Opposite her, in the role of Adriana, is a soprano who as a Verdi and verismo specialist also appears regularly at all the major international opera houses, Micaela Carosi. The role of Maurizio is sung by the world-class tenor Marcelo Álvarez. Conductor Renato Palumbo is very much at home with Italian Romantic repertoire which makes him the ideal conductor for Cilea’s operatic masterpiece.

the outstanding impression is of a mostly Italian cast who deliver the goods with gutsy native confidence...As Adriana the famous actress [Carosi] decaims her lines in high melodramatic style...[Cornetti] is armed with chest notes like torpedoes which she fires off untiring aplomb...[Palumbo] is rumbustious in the genre scenes where Cilea starts to sound like Massenet.

[Carosi's] voice is a genuine spinto, with the essential meaty middle and basic tonal warmth that Cilea's unfailingly appealing, exceedingly womanly heroine requires...Álvarez [gives] his all as Maurizio...[Cornetti] has the right instrument for the Princess di Bouillon...Palumbo displays the good taste that any fine conductor must exercise in keeping the excessive lushness of Cilea's score within reasonable bounds.