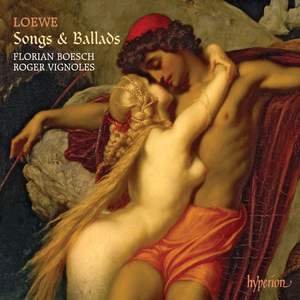 In his lifetime the German composer Carl Loewe was often referred to as the ‘Schubert of North Germany’. He is frequently credited with the development of the romantic ballad into a powerful art form, and his prolific output of ballads and songs amounts to some four hundred works. Loewe’s treatment of long narrative poems in a clever and powerful mixture of dramatic and lyrical styles, has been a template for many subsequent composers.

Many of the ballads on this disc are masterpieces of their genre and they are performed here in a magisterial Hyperion debut by Austrian baritone Florian Boesch. In these refined performances it is clear why Boesch has been labelled as ‘one of the finest interpreters of Lieder of his generation’. His ability to create characters and enact stories brings the dramatic texts vividly to life, while he maintains musical coherence with astonishing lyricism.

Loewe’s daring and imaginative accompaniments are played here by the incomparable Roger Vignoles, in another addition to his acclaimed discography of Hyperion recordings. His eloquent pianism and penetrating musicianship match Boesch’s artistry to perfection.

Boesch's performance...demonstrates huge imaginative variety in characterisation (offering two different voices when necessary, or even three in Loewe's setting of Erlkonig), and moving convincingly to the lower register...Vignoles matches him in playing of perception in what is pretty well an ideal introduction to a fascinating figure.

Loewe's writing is perhaps less sophisticated than Schubert's but, like him, he had a supremely appealing melodic gift...As for the singing, I cannot praise it too highly. Florian Boesch has a warmly attractive baritone voice and his diction is first class, as is his response to the word meanings. Roger Vignoles's accompaniments, too, give great pleasure in themselves, especially in the pictorial devices which Loewe so relishes.

Loewe is at his best when the drama of a ballad unfolds through the characters' words, and his 'Erlkönig', though less terrifying than Schubert's, is more chilling: the child's death is a greater musical shock....Boesch sings these ballads with strong dramatic sympathy...Vignoles's accompaniment is always confident, very musical and perceptive.

Boesch is arguably [Loewe's] finest interpreter today, and this disc is mesmerising. An expressionistic vocal actor, Boesch has the ability to change the sound of his voice to fit the character he is portraying; when he gets to the big dialogues like Erlkönig, Edward or Herr Oluf, it's hard to believe that only one person is singing...A benchmark recording, and essential listening.