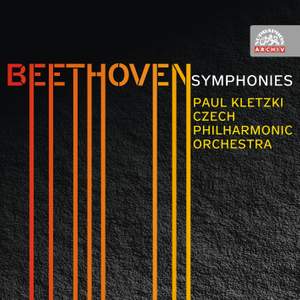 Egmont. Overture to the tragedy by Goethe, Op. 84

I. Awakening of Cheerful Feelings upon Arrival in the Country. Al

V. Shepherds´ Song. Happy and Thankful Feelings After the Storm.

Beethoven’s symphonies are among the cornerstones of the symphonic repertoire. They bear witness to the composer’s remarkable journey from airy Classicism to the peerless idiom he had developed on the threshold of the Romantic epoch.

Those who have taken up the challenge to record the complete cycle include the Polish-born conductor Paul Kletzki, who gained great renown after the war, primarily in America. He was the principal conductor of the Royal Liverpool Philharmonic Orchestra for a year and after his debut in Philadelphia went on to conduct the leading American and European orchestras.

This remarkable complete recording of Beethoven’s symphonies was made during Kletzki’s performances with the Czech Philharmonic in 1967, during the orchestra’s golden age under the chief conductor Karel Ančerl. This gem of the Supraphon archives thoroughly deserves the current re-edition in remastered form owing to its freshness and expressive depth.

Beethoven as explored by Kletzki – a legendary, time-honoured recording.

The Czech Phil’s sound here is charismatic and idiomatic, with a rich, muscular string timbre cushioning highly distinctive wind and brass playing...The interpretations hold up very well – Kletzki’s speeds are unhurried, but never seem unduly slow as he’s so good at sustaining the string lines and giving plenty of lift to the rhythms...[in the Ninth] the Czech choral sound is thrilling and Kletzki has good soloists.