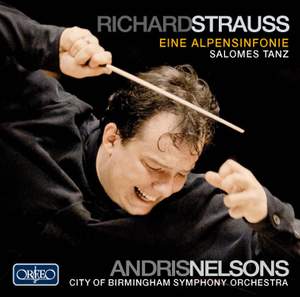 this is the most dangerous, risk-taking performance of them all. Nelsons propels forward but never overdrives the exuberant rushes and crises of the mountaineers...[Salome's dance] has personality... — BBC Music Magazine, June 2011, More…

Eintritt in den Wald (Entry into the Wood)

Am Wasserfall (At the Waterfall)

Auf dem Gletscher (On the Glacier)

Auf dem Gipfel (On the Summit)

With his Alpine Symphony, Richard Strauss invites us to see it as a veritable ‘summit’ in the genre of programme music. It is masterly in its layers of orchestration (not unlike a mountain massif ), while its harmonic and motivic riches offer a sublime acoustic panorama that is gigantic in scope.

The City of Birmingham Symphony Orchestra under its music director Andris Nelsons, have already released a highly-praised Strauss disc on Orfeo with Ein Heldenleben and the Rosenkavalier Suite, and Nelsons understands how to convey his fascination with Strauss to both orchestra and listeners with utter conviction.

There are naturally moments of solitude and reflection – as when, for example, Strauss makes thematic allusions to Also sprach Zarathustra (at the summit). Then there is the sense of calm that is subtly savoured to the full after the storms that marked the descent. Strauss was not just concerned with personal liberty, but was also capable of enthusiastic liberality – as in his opera Salome, which caused such a scandal at the time of its première. This is clearly audible in the brilliant encore that the CBSO and Nelsons offer here, namely the Dance of the Seven Veils. We rarely hear it so finely tuned and with such unerring accuracy in its orchestral colours and rhythmic density, not to mention climaxes and shifts in tempi. This classic of the early 20th century could hardly be played in a fresher, more contemporary manner.

this is the most dangerous, risk-taking performance of them all. Nelsons propels forward but never overdrives the exuberant rushes and crises of the mountaineers...[Salome's dance] has personality written all over it in the best possible way...veer[ing] between impressionistic delicacy and expressionist nightmare...Stunning work.

Nelsons [rightly] conceives the piece as a symphonic abstraction, its descriptive qualities merely the starting-point for an ascent then descent whose 'rise and fall' is of an altogether more elemental cast...[The Dance of the Seven Veils] highly persuasive in its inexorable progress from suave languor to febrile abandon...an Alpine Symphony that reaffirms the chemistry of the Nelsons/CBSO partnership.

From the dark opening to the sunlit blazes on the mountaintop, Nelsons’s approach to Strauss’s Alpine Symphony is sharply defined, the textures malleable yet tightly controlled and the music animated with passion. The CBSO plays gloriously both in the symphony and in the sultriness and wild excess of Salome’s Dance of the Seven Veils.