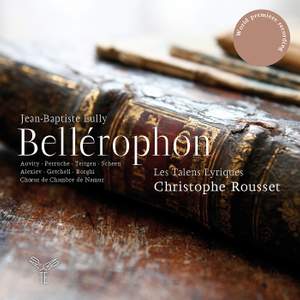 this is a handsomely shaped performance with alert choral singing and expressive orchestral playing. In the title role, Cyril Auvity is convincingly heroic but also capable of fragility when... — BBC Music Magazine, June 2011, 4 out of 5 stars More…

Recording of the Week,  Lully’s Bellérophon

Christophe Rousset presides over a splendidly elegant account of Lully’s 1679 opera, with Cyril Auvity in the title-role, and Les Talens Lyriques on vigorous form.

Recorded in the Opera Royal of the Chateau de Versailles, France.

This world première and eagerly anticipated release is the fruit of lengthy musicological research by Christophe Rousset. Together with a cast of great talent and breath-taking performances from Cyril Auvity and Céline Scheen, Christophe Rousset, conducting his Talens Lyriques invites us to rediscover the revelation that is Bellérophon, first performed on January 31st, 1679.

It originally ran for nine months at the Palais Royal, and it is not surprising that the work, composed by Jean-Baptiste Lully, endeared itself to the king. The mythical story of a fearless hero whose arrogance is punished by the gods was none too subtly altered to show a hero who practises restraint and moderation to the foes he vanquishes – a reference to the Sun King's recent victory over the Dutch, the Spanish and the Holy Roman Emperor.

This is the first recording of this opera, presented in French, German and English. Bellérophon was recently showcased on Radio 3: Catherine Bott interviewed Christophe Rousset about the first modern day performance of this tragedie en lyrique, at the sumptuous Opera Royal at Versailles, and his discovery of missing pages of the score in a bookshop in Paris. Rousset also talked about the qualities that make Lully's opera stand out as a masterpiece.

Synopsis: The eponymous hero is Neptune’s son and is happily betrothed to the Lycian princess Philonoé. But the fiery Stenobée also desires Bellérophon and wants revenge due to his rejection of her. Her ally, the magician Amisodar, takes three monsters and creates a new one from them: the chimera. However, Bellérophon defeats the monster without too much difficulty. Thwarted, Stenobée kills herself out of disappointment and the Lycians acclaim Bellérophon whose dazzling strength and benevolence are intended to mirror similar attributes of Louis XIV’s.

this is a handsomely shaped performance with alert choral singing and expressive orchestral playing. In the title role, Cyril Auvity is convincingly heroic but also capable of fragility when required...Ingrid Perruche is magnificent in her role as an Amazon disappointed in her love for Bellérophon. The rewards of this score are a little on the slender side, but this disc makes the best of them.

The music has variety and vitality – the love music elegant and eloquent, the magic-and-monster scenes infused with original effects, the choruses infectiously syncopated... a valuable addition to the catalogue.

This concert performance is excellent, with lively playing from Les Talens Lyriques, and singers who are really inside their roles. Cyril Auvity has a slight edge to his voice but his fluency and ardour command admiration.

Rousset is an assured stylist who produces gratifying results from singers and instrumentalists alike...[Auvity's] vocal timbre admirably suits the ardent side of his character...Céline Scheen's Philonoé is a constant delight...unstinting praise must go to the lively and impeccably drilled Namur Chamber Choir and the refined, mellow texture which Les Talens Lyriques consistently brings to Lully's mainly five-strand string texture.

The performance could hardly be bettered: Rousset delights in Lully’s dancing rhythms and soulful melodies, while the principals are immaculate stylists, especially Cyril Auvity’s thrillingly sung Bellérophon, Ingrid Peruche’s angry Sténobée, Céline Scheen’s sweet-voiced Philonoé and the Stygian-voiced Jean Teitgen as the monster-making sorcerer, Amisodar, and Apollon, among other parts...A feast of baroque that will make you want to dance.

Christophe Rousset is masterful at keeping every bar of this music alive and kicking. Cyril Auvity in the title role sings vividly and with boundless energy and enthusiasm that seems to infect the rest of the excellent cast.

Christophe Rousset’s lavish, impeccably cast studio recording succeeds on every level. Best of all is Ingrid Perruche’s spiteful Sténobée, a wonderful foil to Jean Teitgen’s villainous Amisodar, whose dark magic conjures up the fire-breathing Chimera. Rousset’s pacy direction and superb continuo playing ensure that there are no longueurs. Excellent annotation and luxury packaging too – why can’t all opera releases be as fun as this?