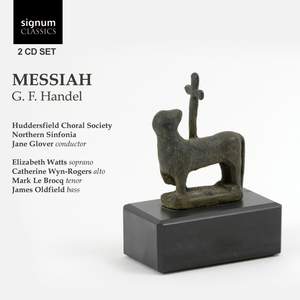 And the Glory of the Lord (chorus)

But who may abide (alto)

And He shall purify (chorus)

O thou that tellest good tidings to Zion (alto)

For behold, darkness shall cover the earth (bass)

The people that walked in darkness (bass)

For unto us a Child is born (chorus)

There were shepherds (soprano) – And lo, the Angel (soprano)

And suddenly there was with the Angel (soprano)

Glory to God in the highest (chorus)

His yoke is easy (chorus)

Behold the Lamb of God (chorus)

He was despised (alto)

And with His stripes (chorus)

All they that see Him (tenor)

He trusted in God (chorus)

He was cut off (tenor)

But Thou didst not leave (tenor)

Lift up your heads (chorus)

Though art gone up on high (alto)

The Lord gave the word (chorus)

How beautiful are the feet (soprano)

Their sound is gone out into all lands (chorus)

Why do the nations so furiously rage (bass)

He that dwelleth in Heaven (tenor)

Thou shalt break them (tenor)

I know that my Redeemer liveth (soprano)

Since by man came death (chorus)

Behold, I tell you a mystery (bass)

The trumpet shall sound (bass)

Then shall be brought to pass (alto) – O death, where is thy sting? (alto & tenor)

But thanks be to God (chorus)

If God be for us (soprano)

Worthy is the Lamb (chorus)

The Huddersfield Choral society has one of the longest and most fruitful relationships with Handel’s famous Messiah than perhaps any other chorus in the world: they first performed it in concert during their inception year of 1836, and have continued to do so annually since 1860 with concerts the world over as well as in their hometown of Huddersfield.

Recorded live in concert in December 2010, this new recording combines the famous ensemble with the Northern Sinfonia and four world-class professionals, under the direction of Jane Glover CBE. The disc begins with John Wainwright’s ‘Christians Awake’, a traditional addition to the Messiah programme at their concerts in Huddersfield.

Also available on Signum is the Huddersfield Choral Society’s performance of Mozart’s 1787 arrangement of the work, with the Royal Philharmonic Orchestra, Dame Felicity Lott, Philip Langridge and others under the direction of Sir Charles Mackerras (SIGCD074).

their collective experience, wholehearted spirit and total commitment return handsome compensation for occasional rough ensemble edges, especially so in the 'Hallelujah Chorus' and final 'Amen'. Glover's sense of drama, attention to detail and tempo relationships, and feeling for ritual nourish a persuasive interpretation, one backed by the Northern Sinfonia's stylish playing.

Glover allow[s] plenty of light and air into the textures...The Huddersfield Choral Society surely knows this music inside out. You can sense the sheer discipline that has gone into its preparation...Pick of the bunch...is the soprano Elizabeth Watts, and not just in her solos: the duet at 'He shall feed his flock' is beautifully tender and reflective.

The buoyant chorus, under Glover’s incisive direction, goes from strength to strength. Four vigorous soloists play their part, especially the tenor Mark Le Brocq and the soprano Elizabeth Watts, particularly fine in If God Be for Us.

Those of us in Huddersfield Town Hall last December knew we had heard a Messiah of memorable quality. The choral singing was fleet and flexible, a strong line-up of soloists – Elizabeth Watts, Catherine Wyn-Rogers, Mark le Brocq and James Oldfield – had been assembled and Jane Glover directed the Northern Sinfonia with that rhythmic vitality which is her hallmark. To everyone’s good fortune the performance was recorded and the result is fresh, vivid and moving.