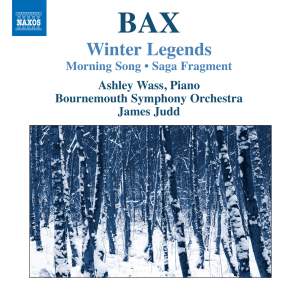 everything is superbly developed and orchestrated, and there's no mistaking the cumulative power of a major statement...Ashley Wass brings impressive clarity and firepower to all three works;... — BBC Music Magazine, June 2011, More…

Arnold Bax was one of the major forces in British composition between the two world wars, his music blending broad melodies and brilliant orchestral sonorities into a lush Romantic sound world. The three works on this disc were composed for the renowned pianist Harriet Cohen.

Bax described Winter Legends as ‘a northern nature piece full of sea and pine forest and dark legends’. Subtitled ‘Maytime in Sussex’, Morning Song celebrated the 21st birthday of the then Princess Elizabeth. In contrast, martial overtones give the Saga Fragment, the composer’s own orchestration of his Piano Quartet of 1922, a darker hue.

everything is superbly developed and orchestrated, and there's no mistaking the cumulative power of a major statement...Ashley Wass brings impressive clarity and firepower to all three works; James Judd and the Bournemouth orchestra accompany with sharp-focus excellence.

This is the talented Ashley Wass's eighth Bax disc for Naxos, and he is kept fully occupied throughout all three works.

Textually, Wass follows Cohen's lead and proves a comparably imperious champion, his partnership with James Judd and an eagerly responsive Bournemouth SO resulting in the most thrustingly cogent account to date. Not only is Wass unfazed by the solo part's considerable technical hurdles, he also displays melting poetry and limpid poise in abundance.

Winter Legends is easily the most substantial work here...It's one of those dark-hued Bax pieces in which Sibelius seems the dominant influence. The short Morning Song is more obviously pictorial, as its subtitle Maytime in Sussex reveals, while Saga Fragment...is far more abrasive, though it still has its more typically succulent moments.

Ashley Wass has cornered the market in recordings of Arnold Bax’s piano music, and here he brilliantly conveys the vibrant spirit that Harriet Cohen, Bax’s muse, must have triggered...The performances throughout are thoroughly winning.