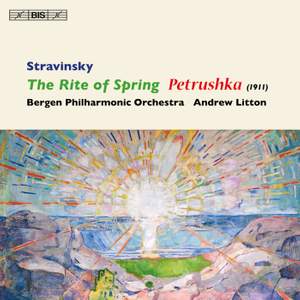 Part I: Adoration of the Earth

This release sees the critically acclaimed Bergen Philharmonic Orchestra under its music director Andrew Litton perform two scores by Igor Stravinsky that stand at the pinnacle of 20th-century orchestral music.

Both Pétrouchka and Le Sacré du printemps were written for the ballet impressario Sergei Diaghilev and his company Les Ballets Russes.

The particularly striking aspect of Pétrouchka was the extensive use of folk song and street music, treated with extreme refinement and often biting irony – the character of Petrushka, a puppet come to life, was described by Stravinsky as ‘the immortal and unhappy hero of every fair-ground in all countries’.

The scandal associated with the 1913 première of Le sacré du printemps has become legendary – a scandal probably caused as much by Nijinsky’s choreography as by Stravinsky’s score. But even today, the music offers an extremely powerful experience, above all through its rhythmic qualities.

True to form, Litton draws exceptionally clean textures from the orchestra, notably fine woodwind colouring, with a keen eye for every facet of both scores...Litton's almost neo-classical approach brings an attractive delicacy to passages such as the 'Ritual Action of the Ancestors'

Virtuoso though the playing and conducting are, this is not a self-regarding performance but one that never loses contact with its deep Russian roots. The playing is polished and well balanced but can roughen to ferocious barbarity...This never has the sense of being played for thrills, yet the effect is all the more thrilling for coming from such depths...a worthy memorial to a fine artist.

Andrew Litton conducts the Bergen Philharmonic in what is at times a visceral reading [of Rite]. The playing is rhythmically sharp, if not quite at Stravinsky's own breakneck speeds all the time...if you're looking for a freshly painted Petrushka or a Rite to shake you up a bit, this is shockingly good. Just make sure the neighbours are out first.

the refinement and precision of the playing are hugely impressive. Litton's care with the textures in Petrushka and his unfussy way of teasing out the instrumental strands in The Rite of Spring matches that exactness