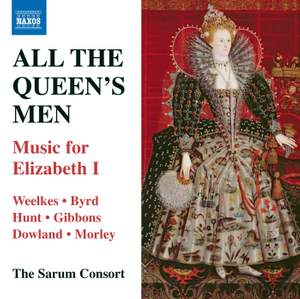 All The Queen’s Men: Music for Elizabeth I

The Sarum Consort and its director establish and stick limpet-like to the underlying beat in this album's choice of works for vocal ensemble, catching the sibilant energy and vigour of O clap... — Classic FM Magazine, June 2011, 4 out of 5 stars More…

Weelkes: As Vesta was from Latmos hill descending

Hunt, T: Hark! did ye ever hear so sweet a singing?

Variation on Robin is to the greenwood gone

Ferrabosco, A II: So beautie on the waters stood

Morley: Hard by a crystal fountain

‘The Virgin Queen’ Elizabeth I was the focal-point of all England; the subject, dedicatee and audience for much of the music composed and performed throughout her long and now legendary reign. The music on this album, chosen for a concert of words and music devised for the Sarum Consort by Deborah Mackay, includes sacred and secular pieces by composers from Byrd to Weelkes. The Sarum Consort here makes its Naxos début under founding musical director Andrew Mackay. “The Sarum Consort is a finely balanced and blended group… whose pacing and control of light and shade cannot be faulted.” Penguin Guide

The Sarum Consort and its director establish and stick limpet-like to the underlying beat in this album's choice of works for vocal ensemble, catching the sibilant energy and vigour of O clap your hands and unleashing a terrific account of Morley's Hard by a crystal fountain. I've heard other early music ensembles, including household names, make heavy weather of pieces that emerge here with lightness and clarity.