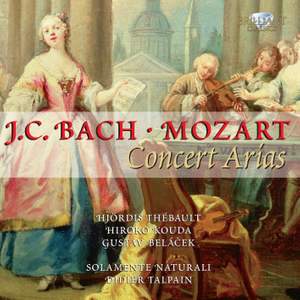 For the first time complete on CD: substantial, large-scale concert arias, in which a solo instrument plays a counterpart against the voice, a kind of Sinfonia Concertante with an instrument and voice as soloists.

Mozart had great respect for the Johann Christian Bach (the youngest son of J.S.) and even in his youth copies and arranged works of him.The influence therefore is obvious.

The origin of the dialogue between a solo voice and several obbligati instruments dates from the early baroque period (1600), and probably emerged from the hum drum setting of the market square where a singer would perform to the accompaniment of a few wind instruments. More refined relations of this musical form soon could be found in sacred and operatic works. This CD contains the complete obbligato arias by master and pupil – J.C Bach and Mozart.Therefore we can hear examples of the pre classical (1750-75) and the classical period (1775-1820). There is one undisputed masterpiece here - Mozart’s Ch’io mi scordi di te? K505 for soprano and piano.The aria is an expression of personal sadness. Nancy Storace, the first Susanna in Figaro, had left Mozart and returned to London. This is no operatic love affair gone wrong, but a real life one. Mozart himself is represented by the piano, Nancy by the stunning soprano role.

Mozart’s friend and teacher J.C. Bach has a world premiere recording on this CD. His aria Sventura in van mi lagno of 1773 is an impressive virtuoso work for high soprano with two obbligato horns. One the players J.C Bach wrote for was none other than Giovanni Punto, hence the extremely challenging nature of the horn part for a natural horn.