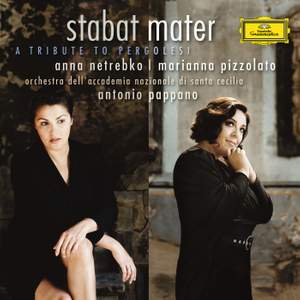 the Russian diva's singing certainly won't disappoint - as thrillingly passionate here as it is in Romantic opera. She's impressively partnered, too, by Marianna Pizzolato, whose full-bodied... — BBC Music Magazine, April 2011, 3 out of 5 stars More…

Assisted by Antonio Pappano and recorded at Netrebko’s July 2010 Baden-Baden concert, here is a landmark performance of one of classical music’s most popular works. In the Stabat Mater, Anna Netrebko’s lusciously dark soprano and mezzo Marianna Pizzolato’s beautifully schooled tones are a marvellous complement to each other.

For this Pergolesi tribute, Anna Netrebko has added the secular cantata, Nel chiuso centro and Questo è il piano is also a secular cantata for alto and strings. Both cantatas add a special touch to this album where Pergolesi’s sacred masterpiece is featured alongside some secular (more operatic) compositions.

the Russian diva's singing certainly won't disappoint - as thrillingly passionate here as it is in Romantic opera. She's impressively partnered, too, by Marianna Pizzolato, whose full-bodied mezzo is as intense and intoxicating as the finest of Italian wines...the sensuous intertwining of two such voluptuous voices makes for a heady mix indeed.

Netrebko steps out of her comfort zone as opera diva to fashion affecting, highly personal interpretations of repertoire that can bear her dramatic singing style...[Her] dramatic energy and emotional commitment are amply matched by the expressive eloquence and tonal warmth of her admirable partner in the Stabat Mater, Marianna Pizzolato.

In the cantata “Nel chiuso centro” [Netrebko] treats the coloratura expressively and brings a more full-bodied sound than we are used to hearing in early 18th-century music...Pappano, on loan from EMI, draws committed playing, especially in the Stabat Mater: The two solo voices create a rich blend and the performance captures the work’s pathos and high drama.

Netrebko finds real depth in this deceptively simple music...Pizzolato applies her expressive powers so well to yet another shepherd/nymph gripe as to make us actually feel sympathetic...the singers blend perfectly, and time and again the attention is caught by the quality of the playing. It is a most distinguished issue.

Neither is a Baroque specialist, though both sing it uncommonly well, and their voices blend finely together in a rather voluptuous way. The tone, as you might expect, is dramatic rather than contemplative. Antonio Pappano's conducting is intense and incisive...it's Pizzolato who steals the show here with a thrilling delivery of the bravura Questo è il Pianto [sic].

When Anna Netrebko decided to dedicate a programme to Giovanni Battista Pergolesi, the choice of Antonio Pappano as conductor was a crucial masterstroke...so sublimely do the two voices intertwine on the duets "Stabat Mater dolorosa" and "Sancta Mater, istud agas" that one fervently hopes this is not to be a temporary alliance.

The instruments may be post-industrial, the articulation unruly, but the sweaty dishevellment of the orchestra is a very pleasing fit to this Neapolitan masterpiece. [Netrebko and Pizzolato] spit and smoulder their way through heavily perfumed accounts of "Nel chiuso centro" and "Questo è il pianto". Irresistible.

Though she minds her words carefully and modulates her tone, [Netrebko is] still at heart the suffering diva, dazzling us with that dark voice soaked in luscious full cream...the two voice colours blend superbly in the Stabat Mater, sensuously curling round in duet like intertwined vines...Pappano springs through these pieces with loving fervour.