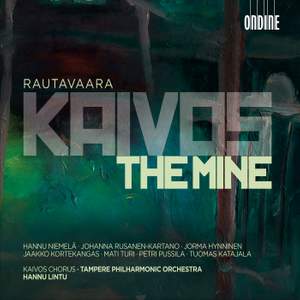 Offer, Rautavaara: Kaivos (The Mine)

The Mine of the title is a microcosm of both society and the individual soul - and its inhabitants are cast from strength. The great Jorma Hynninen is in untarnished voice as the dictator figure,... — BBC Music Magazine, May 2011, 5 out of 5 stars More…

Rautavaara: Kaivos (The Mine)

This new release features the three-act opera Kaivos (The Mine, 1962) by Einojuhani Rautavaara. The patriarch of Finnish composers wrote this, his first opera, in 1957–62 and today considers it, “perhaps the best opera I have ever written, a real thriller whose underlying theme – that a human being defines himself through his choices – is nevertheless universal.”

This CD release represents an apogee in the work’s exceptional history: the opera’s underlying thematic allusions to the 1956 Hungarian uprising impeded a staged performance in Finland, a neighboring country of the then Soviet Union. Instead, a Finnish TV production was broadcast in 1963. The first live (concert) performance in Tampere (Finland) in September 2010 featured the same cast and performers as this première CD recording.

Legendary baritone Jorma Hynninen (lead role ‘Commissar’), who celebrates his 70th anniversary in 2011, has starred in a number of Finnish operas since the 1970s to great international success, including at the MET in New York.

The Mine of the title is a microcosm of both society and the individual soul - and its inhabitants are cast from strength. The great Jorma Hynninen is in untarnished voice as the dictator figure, The Commissar; the bass Hannu Niemala is a dark Simon...and the mezzo-tinted soprano Johanna Rusanen-Kartano a powerful Ira, his compromised lover.

Any cast willing to take on this dauntingly unglamorous music, and able to do so with such authority, commands rather more than respect. There is certainly some strain in the singing but also a compelling quota of dramatic truth and passion. Hannu Lintu's belief in the work shines through and he brings the Tampere Philharmonic with him undaunted...The recording fills a major gap in the Ruatavaara discography and fills it with distinction.