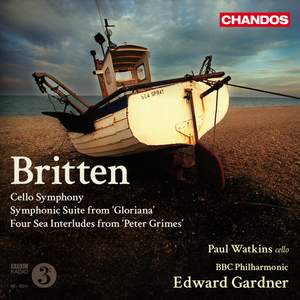 Three elements stand out: firstly, the dramatic intensity of purpose he finds in all pieces; secondly, the sizzling soloistic detail he draws from the BBC Philharmonic and, thirdly, the depth... — BBC Music Magazine, April 2011, 5 out of 5 stars More…

In this new release, we present a unique group of works, including the rarely recorded Symphonic Suite from Gloriana, the Symphony for Cello and Orchestra, and one of Britten’s most popular works, the Four Sea Interludes. They are performed by the BBC Philharmonic with two exclusive Chandos artists: Edward Gardner, the music director of English National Opera and well known for his interpretations of the music of Britten, and Paul Watkins, one of the world’s leading cellists.

The Symphony for Cello and Orchestra was Britten’s only substantial piece of absolute symphonic music. As the title suggests, throughout the work the soloist and the orchestra are treated on equal terms, sharing all the important melodic material. The symphony was originally written for the Russian cellist Mstislav Rostropovich who held a unique position among the various creative partners of Britten, inspiring him to compose abstract instrumental music at a time when his heavy commitments to the operatic genre and vocal music might otherwise have left him little time or inclination for it. The work was premiered in the Great Hall of the Moscow Conservatory in 1964 by Rostropovich and the Moscow Philharmonic under Britten’s baton. The performance was a success, and the local students who attended the concert were so enthusiastic in their response that the finale had to be encored.

The Four Sea Interludes consist of highly memorable orchestral interludes which Britten extracted for concert performance from the score of his large-scale opera Peter Grimes. The premiere of the opera famously reopened London’s Sadler’s Wells Theatre in 1945 to such tremendous critical acclaim that the fortunes of English opera were revived almost overnight. The North Sea, both benign and savage, plays a central role in the drama and its contrasting facets are celebrated in the interludes. ‘Sunday Morning’ depicts the sun glittering on the waves and the jubilant pealing of church bells, while ‘Storm’, a ferocious orchestral tempest performed in the difficult key of E minor, symbolises Grimes’s inner turmoil and yearning for a peaceful haven.

The Symphonic Suite derives from the opera Gloriana which was first performed at the Royal Opera House at a gala event in 1953 to celebrate the Coronation of HM The Queen. The work depicted – perhaps unwisely in view of the audience – the ill-fated relationship between Elizabeth I and the Earl of Essex. The opera’s infamously negative reception meant that the work was rarely performed again in the composer’s lifetime. Britten, however, did salvage some orchestral extracts from the opera for concert use, including the Suite featured on this disc.

Three elements stand out: firstly, the dramatic intensity of purpose he finds in all pieces; secondly, the sizzling soloistic detail he draws from the BBC Philharmonic and, thirdly, the depth and scope of the recorded sound...Watkins is an interpreter of compelling seriousness, whose musical understanding operates at a profound level...a truly symphonic collaboration.

this is a very good Britten disc indeed, with an interesting programme that is played with energetic commitment, scrupulous attention to detail and an obvious sympathy for the music...Gardner really seems to relish Britten's orchestral writing, and the BBC Philharmonic is on superb form throughout.

[Gardner's] atmospheric, emotional and musically detailed accounts of the four Sea Interludes from that great opera are a fine souvenir of his theatre performances...The BBC Phil responds excitingly and with rhythmic verve to the rarely recorded suite from Britten’s Coronation opera, Gloriana...the cod-Tudor Courtly Dances are a treat.

Paul Watkins's performance with Edward Gardner and the BBC Philharmonic never forgets that the work is called a symphony for good reason...In fact, all the orchestral playing is of such a high standard that one notices the other instrumental solos almost as much as Watkins's own fine-grained contributions

Gloriana, on the life of Elizabeth I, has never established itself in the opera house, but it’s full of wonderful music. Gardner and the BBC Philharmonic bring out the melancholy undertow and the textural subtlety lurking under the music’s ceremonial surface. The performance of the Cello Symphony with Paul Watkins is similarly sensitive.