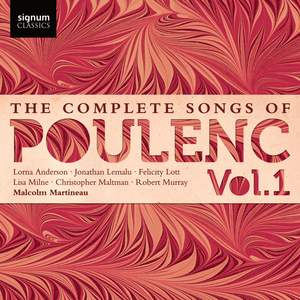 Alongside Malcolm Martineau's searching piano, the singers find a consistent character: considered, spacious, unaffected but cumulatively intense, to the extent that you may need to pause and... — BBC Music Magazine, June 2011, More…

Composed over a period of 44 years the 150 works for piano and voice of Francis Poulenc remain consistently popular to concert audiences the world over. Varying in their individual style and character in a way that defies generalisation, Poulenc set music to a wide range of different French poetry – both ancient and modern, from the serious to the surreal.

This release marks the first in a new series charting the complete songs of Francis Poulenc, performed by some of the greatest singers of the day and accompanied by the exceptional Malcolm Martineau. Future releases will feature several works that have never before been recorded.

Alongside Malcolm Martineau's searching piano, the singers find a consistent character: considered, spacious, unaffected but cumulatively intense, to the extent that you may need to pause and catch your breath every so often...Anderson finds a deadpan, butter-wouldn't-melt character for Vilmorin's more suggestive lines, while Maltman brings good humour and a poker face to the earthy Chansons galliardes

these are songs that benefit greatly from the kind of musical intelligence Lott has in abundance...The early Chansons gaillardes are eloquently sung by Christopher Maltman...Lorna Anderson gives straightforward and very attractive readings...Lisa Milne is similarly excellent in the cycle Fiancailles pour rire and the slightly later group of three Metamorphoses

The best performances... - Murray in the early Cocteau cycle Cocardes, Maltman in the Chansons Gaillardes, Milne in Fiançailles pour Rire – are very fine, even if it remains a disc to sample piecemeal rather than as a whole

This is a delightful project...Plus factors include national treasure Felicity Lott, divine in the 1960 cycle La Courte Paille. There’s also the masterly accompaniment of Malcolm Martineau, who helps to confirm Poulenc’s belief that his songs contained better piano music than any of his solo pieces.