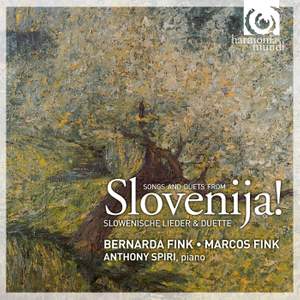 [The Finks] throw a spotlight on the little known Slovenian art-song repertoire of the late 19th century, when nationalism swept the east European fringe, defining its multi-ethnic culture in... — Financial Times, 2nd April 2011, 4 out of 5 stars More…

Closely associated with the folklore of the Balkans, the musical tradition of Slovenia also has a Romantic branch born at the confluence of the Alps and the Adriatic, between Austria and Italy. Bernarda and Marcos Fink (whose parents are Slovenian) have selected the most representative songs and duets of a style which, around the turn of the 20th century, combined the poetic rigour of the great European musical centres with the expression of national identity. Bernarda Fink’s repertoire ranges from Baroque to 20th - century, and she appears regularly with such great international orchestras as the Vienna and Berlin Philharmonics as well as celebrated Baroque ensembles. Among the conductors with whom she works are Nikolaus Harnoncourt, René Jacobs, Mariss Jansons and Riccardo Muti.

Bernarda Fink has taken part in more than 50 recordings, many of them for harmonia mundi. Her brother, bass-baritone Marcos has performed in concert halls and opera houses around the world. Marcos Fink is also an enthusiastic interpreter of lieder. He has participated in numerous CD recordings ranging from Baroque to contemporary music. After Canciones argentinas, this recital of Slovenian songs is the second recording the siblings Fink have made for harmonia mundi.

[The Finks] throw a spotlight on the little known Slovenian art-song repertoire of the late 19th century, when nationalism swept the east European fringe, defining its multi-ethnic culture in poetry and music. The salon style of these duets and solos echoes Tchaikovsky’s: the Finks have done us a favour.

Throughout, the singing of both artists is wonderfully sensitive and persuasively understanding on a disc that will give continuing pleasure, vividly recorded and admirably documented.

these composers' voices are distinctive and Bernarda Fink and her brother Marcos...are persuasive advocates for their music. Marcos is an attractively buzz-saw-sounding bass-baritone with a hint of Southern Comfort in the middle of the voice...Bernarda is on tip-top form too...The top of the voice too has a silvery lining to it.