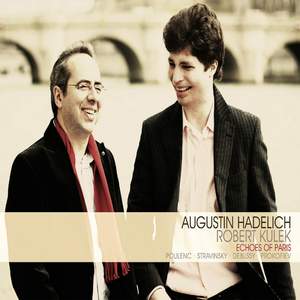 Hand in hand with the intelligence of the programme go the wondrous playing of the violinist Augustin Hadelich and his like-minded pianist Robert Kulek. These are exceptionally compelling performances,... — Gramophone Magazine, April 2011 More…

Stravinsky: Suite after themes, fragments and pieces by Giambattista Pergolesi

Augustin Hadelich’s sensational debut on Avie Records, 'Flying Solo' (AV2180), helped catapult him from a highly respected and acclaimed position in the classical music world, into an ever-widening and adoring circle of fans who helped drive the album into the Billboard Classical Chart. Alongside major debuts with the likes of the Cleveland Orchestra and the New York Philharmonic, his UK debut at the Sage Gateshead and return performances with the Los Angeles Philharmonic and Indianapolis Symphony, major feature coverage in The New Yorker, The New York Times, The Los Angeles Times and more has propelled Augustin’s media profile to an all-time high.

'Echoes of Paris' is Augustin’s first chamber recording and casts intriguing connections between Frenchmen Debussy and Poulenc and Russians Prokofiev and Stravinsky, who both flocked to Paris and were heavily influenced by the city’s electric atmosphere and cultural scene. Augustin comments, “I have chosen the four works on this album primarily because they fit so well together … the ‘echoes of Paris’ that tie them together include puppetry, percussion, marches and jazz references.”

Above all it is Augustin’s riveting performance of these striking 20th century works that will captivate consumers and continue to broaden his outstanding reputation far and wide.

Hand in hand with the intelligence of the programme go the wondrous playing of the violinist Augustin Hadelich and his like-minded pianist Robert Kulek. These are exceptionally compelling performances, sharply defined in character, immaculately articulated, rich in interpretative acumen and blessed with extraordinary finesse.

For my money, Prokofiev’s Second Sonata, transcribed by David Oistrakh from the original for flute, always sits more happily in its version for violin, particularly when played with the eloquence and sense of space exhibited here.

a rich programme superbly played by German violinist Augustin Hadelich and his pianist, Robert Kulek. All four composers were associated with Paris, but their different musical languages are perceptively accented here. No matter that Prokofiev wrote his Second Violin Sonata back in Russia: it adds another strand of colour to a winning recital.