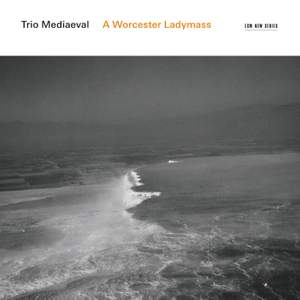 The whole programme flows together beautifully and the Trio's diction and tone perfectly combines celestial purity and perfection with human warmth and vulnerability. — BBC Music Magazine, May 2011, 5 out of 5 stars More…

The first new Trio Mediaeval album in four years (since Folk Songs), and the first since Stella Maris (2005) to feature medieval sacred music, A Worcester Ladymass presents a reconstruction of a 13th century votive Mass to the Virgin Mary, based on manuscripts and fragments originating in a Benedictine Abbey in the English Midlands. Inserted amid the medieval music are a Credo and Benedicamus Domino specially written for this programme by Gavin Bryars, one of several leading contemporary composers who have championed the Trio.

The old and the new, literally and conceptually, intermingle in the work of this vocal ensemble. “We feel that performing mediaeval music today gives us the freedom to let our imagination and ideas flow, as though we are creating contemporary music,” says Anna Maria Friman. In this spirit the group explores the polyphonic movements of the Mass, the intricately interweaving voices of motets and the declamatory tone of the Conductus.

The Trio Mediaeval, founded in Oslo in 1997, made a powerful impact in 2001 when their ECM debut, Words of the Angel, was released, and have been going from strength to strength ever since. Their highly distinctive “Scandinavian” vocal sound has brought something fresh and original to the performance of sacred music.

“The word ‘mellifluous’ might almost have been coined to describe the distinctively pure, cool sound of Trio Mediaeval’s three female voices. It has an alluring quality all its own, which makes everything they sing – from the earliest polyphony to newly composed pieces which, to some extent, inhabit the same sound-world – wonderfully rewarding to listen to.” Daily Telegraph

The whole programme flows together beautifully and the Trio's diction and tone perfectly combines celestial purity and perfection with human warmth and vulnerability.

The music assembled by the Trio Medieval is hugely varied, with spoken or intoned prayers and readings replaced by works in the conductus and motet styles. Into this mix are added a Credo and a Benedicamus Domino, newly composed by Gavin Bryars. The atmosphere is magical.

Trio Mediæval once more apply their ingenuity to sacred vocal music from the 13th century. This putative votive Mass to the Virgin Mary is reconstructed from fragments of polyphony and plainsong that survived at Worcester...the three female voices sing the Mass with haunting purity and tangy timbre.